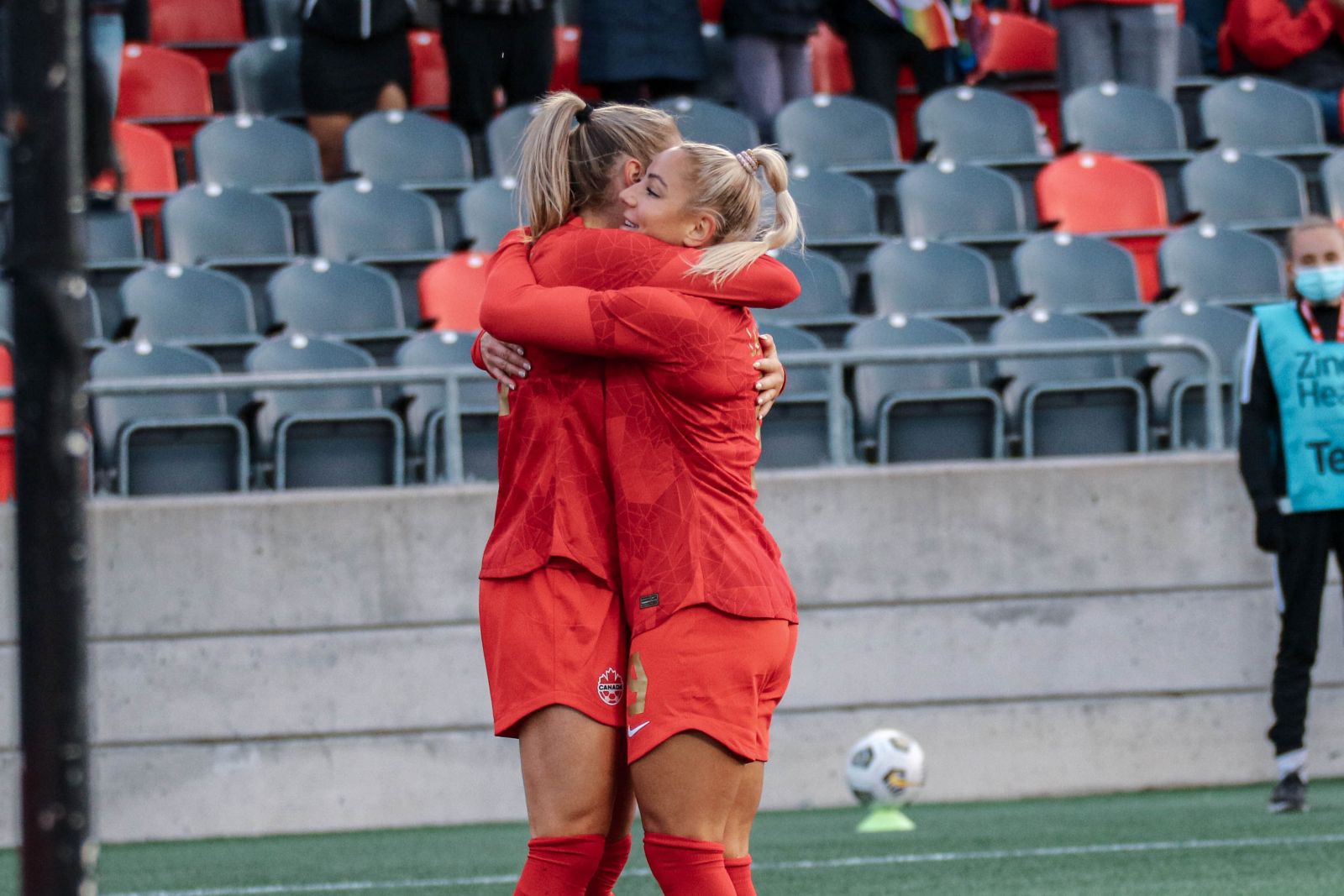 Photo courtesy of Audry Magny, Canada Soccer
Article courtesy of Canada Soccer
TORONTO. - Canada Soccer Women’s National Team defeated New Zealand 1:0 in their second  Celebration Tour victory in Montreal, QC to set a National Women’s Team record of 12 straight undefeated matches since April 2021. Adriana Leon’s 16’ goal was her third in two games and Stephanie Labbé and Erin McLeod combined for the shutout victory. The win extended Canada's undefeated streak to 12 matches in 2021, a new Women's National Team record.
“What I liked is the clean sheet. We definitely said we didn’t want to concede, said Head Coach Bev Priestman. “New Zealand came out more organized and a more difficult team to beat. To get the win, and remain undefeated I’m very happy. I thought the fans were phenomenal tonight. They were very vocal and helped us through the game.”
“This was the first time for me. I’ve never played at home, and that’s an experience I’ll cherish for the rest of my life for sure,” said Gabrielle Carle. “In Ottawa, getting to score that many goals at home was a highlight andbeing able to share the Gold Medal with crowds in Quebec and Ontario was important.”
“I think it was a unique experience. It was the first time my family have seen me play since I was a professional so that was nice for them, but it was nice for me as well,” said Evelyne Viens.   “My life changed and getting to represent Canada is such a chance. It’s just the beginning for me.”
Highlights: https://www.youtube.com/watch?v=mXpO29mkROs
Photos: https://www.flickr.com/search/?user_id=46765827%40N08&view_all=1&text=20211026
Canada got on the scoresheet early with a goal from Adriana Leon (16’). Jessie Fleming drew a couple of New Zealand defenders to her as she carried the ball, and slid a pass in to Janine Beckie. Beckie’s shot was saved but Leon was there to pounce on the rebound and her follow-up shot trickled in.
Ria Percival nearly equalized for New Zealand in the 26’ with a shot from distance, but Stephanie Labbé was able to get a hand to the high shot and push it over the crossbar, preserving the clean sheet and keeping Canada in the lead 1:0 at halftime.
In the 55’, Jayde Riviere put in a great cross from the wing and found Leon, who was able to get a volley off to challenge New Zealand goalkeeper Anna Leat who made the save.
Canada had a great opportunity to double the lead in the 75’. Quinn sent a ball over the top of the New Zealand defence and right into the path of Jordyn Huitema. Huitema was able to beat the on-rushing keeper to the ball and chip the ball over her from outside the box, but the chip shot bounced just wide of the net.
In the 81’, Quinn played another great long ball, this time switching the field to Riviere who was able to create some space to get a shot away, but the shot soared over the net.
New Zealand had a late opportunity to level the score in the 85’. Hannah Blake hit a strong shot from just outside of the Canada penalty area that went just over the top of the net, but it looked like Canadian goalkeeper Erin McLeod had the shot covered.
Canada’s Starting XI featured Captain Christine Sinclair, Stephanie Labbé, Kadeisha Buchanan Shelina Zadorsky, Quinn, Deanne Rose, Adriana Leon, Janine Beckie, Jessie Fleming, Sophie Schmidt, and Gabrielle Carle. Head Coach Bev Priestman replaced Labbé, Zadorsky, Sinclair and Schmidt with Erin McLeod, Gilles, Viens, Riviere (47’), Rose with Jordyn Huitema (57’), Beckie with Desiree Scott (73’).