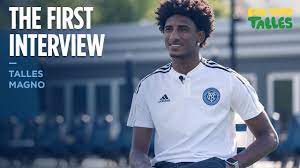 Photo courtesy of NYCFC
Article by Scott Churchson IG: @schurchson
Columnist and Host Spanglish Sports World & Spanglish World Networks
New York. - New York City is unlike most places in the world. This city has the Statue of Liberty, the Empire State Building, Broadway, Times Square, and a thousand more places that it's known for. It is also one of the biggest sports cities in the world with 8 teams inside and 3 just outside it. Two of these, the Yankees, and Knicks, are the most valuable teams in their respective sports. Despite this, when the announcement was made that Talles Magno, the talented 18-year-old attacker from Brazil was coming to NYCFC, it was regarded as a massive grab both for the team and MLS as a whole. Experts predicted that he'd end up in Europe, with Liverpool and Real Madrid considered by many to be front runners, so the idea of going to a city and a country where soccer takes an absolute back seat to other sports came as a surprise to many. This is the player who ended up on the world's radar after scoring two goals in the 2019 FIFA U-17 World Cup for his native Brazil on route to the championship that year, the player who was named The Guardians Next Generation 2019 and was profiled as one of the 60 best young talents in the world ended up in NY of all places. The posting fee to grab him was about $12 million U.S., making him one of the most expensive transfers in MLS history. All of this adds up to a great deal of pressure for the young man.

Coming to New York & NYCFC ironically might be the best thing for him. Thanks to this city's focus on two NBA teams in the playoffs plus the Yankees and Mets all hogging the headlines there is much less pressure on him than this city will typically afford new talent. This is the town that once mercilessly booed Giants Quarterback Daniel Jones. Not a big deal, except he was in the stands at a Yankee game and had not even taken a snap with his new team yet. This is what I am used to seeing after a lifetime of living here. However, Magno is in a unique position. For all his talent, he is still just an 18-year-old kid. During the press conference today, he handled himself well-being both amiable and relaxed, excited but poised. Aided with the guide of a translator, he talked about how he is already navigating the new system, getting to know his new teammates, and facing the challenge of learning two new languages. New York is a chance to show off his skills on a stage outside his native Brazil while continuing to develop as an athlete over the course of the next few years. If he does well, it could be a great marketing move for NYCFC and MLS in the long run, helping to increase interest in soccer and improve its popularity in New York and the US.  Heck, with the way things are going it may soon be more popular than baseball, but that will be discussed in more detail in my next article.
MLS Soccer 2019 FIFA U-17 World Cup NYCFC Talles Magno Yankees Knicks Liverpool Real Madrid Spanglish Sports World Spanglish World Network Scott Churchson