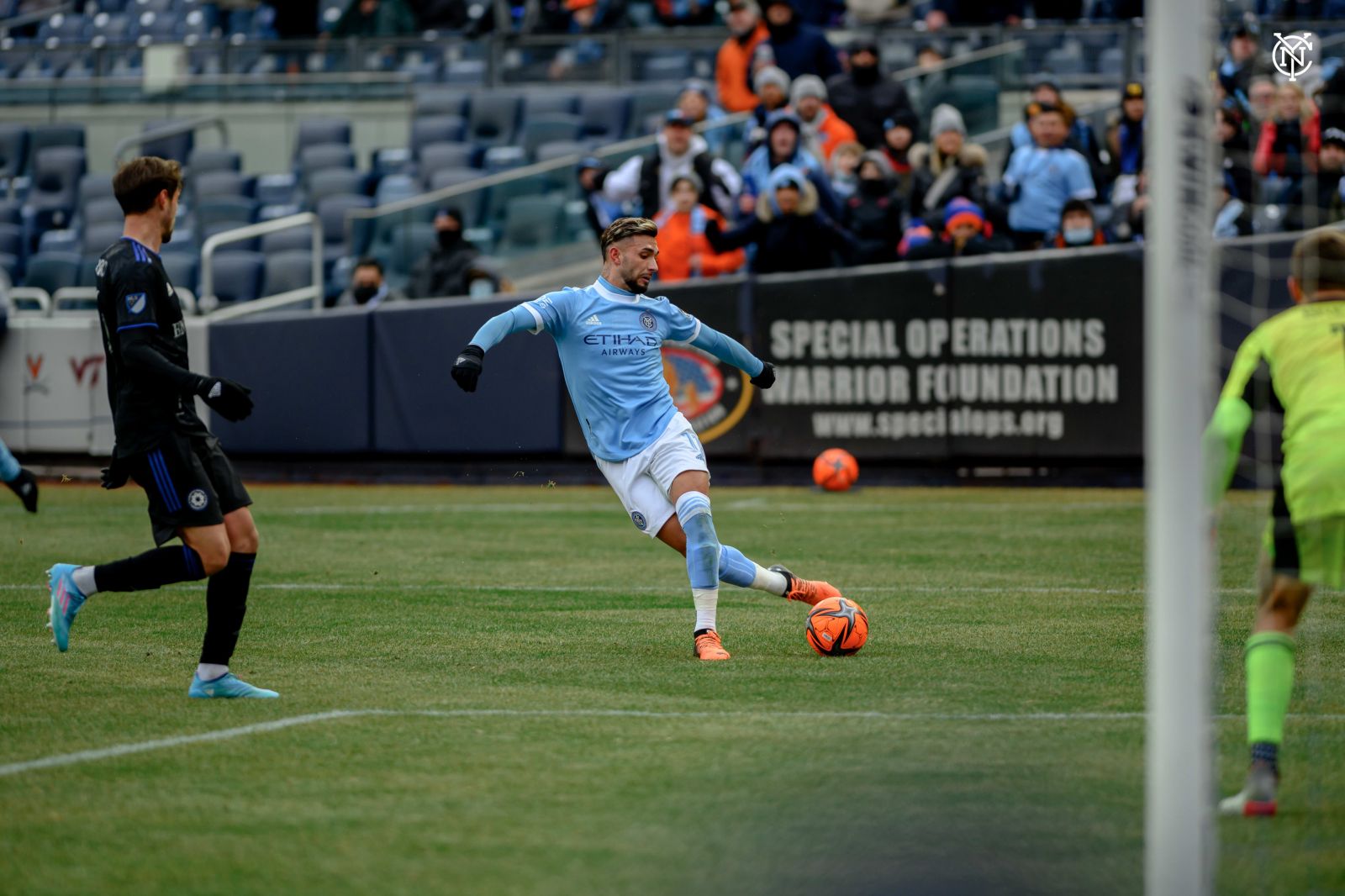 Photo courtesy of NYCFC.com
Article by Scott Churchson, The Sports Den & The Sports Insiders
Host and Journalist Spanglish World Networks, Spanglish Sports World
New York. - In just below freezing temperatures and intermittent rain and snow the Gents in Blue found the back of the net four times on the day they unveiled their championship banner with an impressive 4-1 victory over FC Montreal. Alexander Callens, Santi Rodriguez, Talles Magno & Thiago Andrade all scored as the team fired off 7 shots on goal to just 3. The team over it's first two MLS matches had failed to score a goal so the offensive burst was huge. Said coach Ronny Deila, “I expect goals from Talles, Thiago and Santi. They are good finishers and they are able as well. It’ll come more and more. It's a very good strength for the team that we have that we can score from different positions. We scored four today without Tati and Maxi scoring, and we know what those two can do so that's a strength for the team.”
Montreal, who have now lost their first three matches to start the season, picked up their loan goal in the 52nd minute by Zachary Brault-Gillard to cut the lead then to 2-1.

For NYCFC, scoring 4 without a goal from last year's Golden Boot winner Tati Castellanos is encouraging for the team from the Bronx given that this was the first match this season in MLS where they scored a goal (having lost 1-0 to LA followed by a 0-0 tie against Vancouver). Next week they'll have another home match this time last year's Eastern Conference final rematch against the Philadelphia Union with a quick stop in Guatamala for the second CONCACAF Champion's League Quaterfinal match on Tuesday against Comunicaciones,

1) NYCFC's success at home continues from last season & beyond; last season going 10-3-4 & and a whopping 59-12-24 since 2016.
2) NYCFC is currently up 3-1 over Comunicaciones coming into Tuesday's Quarterfinal match. Should they win they'll move onto the semifinals sometime between April 5th against the winner of the Seattle Sounders/Leon matchup. Right now the Sounders are up 3-0 in their own first match.
3) Montreal the past 5 seasons have struggled, only once reaching higher than 9th place; reaching 7th in 2018 but still missing the playoffs that year.
4) Talles Magno continues to impress. In 6 matches overall this season he now sits at 3 goals and an assist with a pair of additional goals overturned due to offsides. The teenager is currently under contract with the team until 2026.
5) Their MLS match this Saturday is expected to be firey. Last season's Eastern Conference final many consider NYCFC to have caught a break when the Union were missing a full 11 players due to Covid. With a depleted roster the team lost 2-1 at home paving the way for NYCFC to reach and eventually win in the finals. With Philadelphia barely 100 miles from Yankee Stadium and the weather expected to be in the upper 50s expect a large Union crowd in attendance as their team looks to avenge their loss last November.
FIFA Concacaf MLS Soccer NYCFC FC Montreal NYCFC.com Scott Churchson The Sports Den Spanglish Sports World Spanglish World Networks Zingo TV