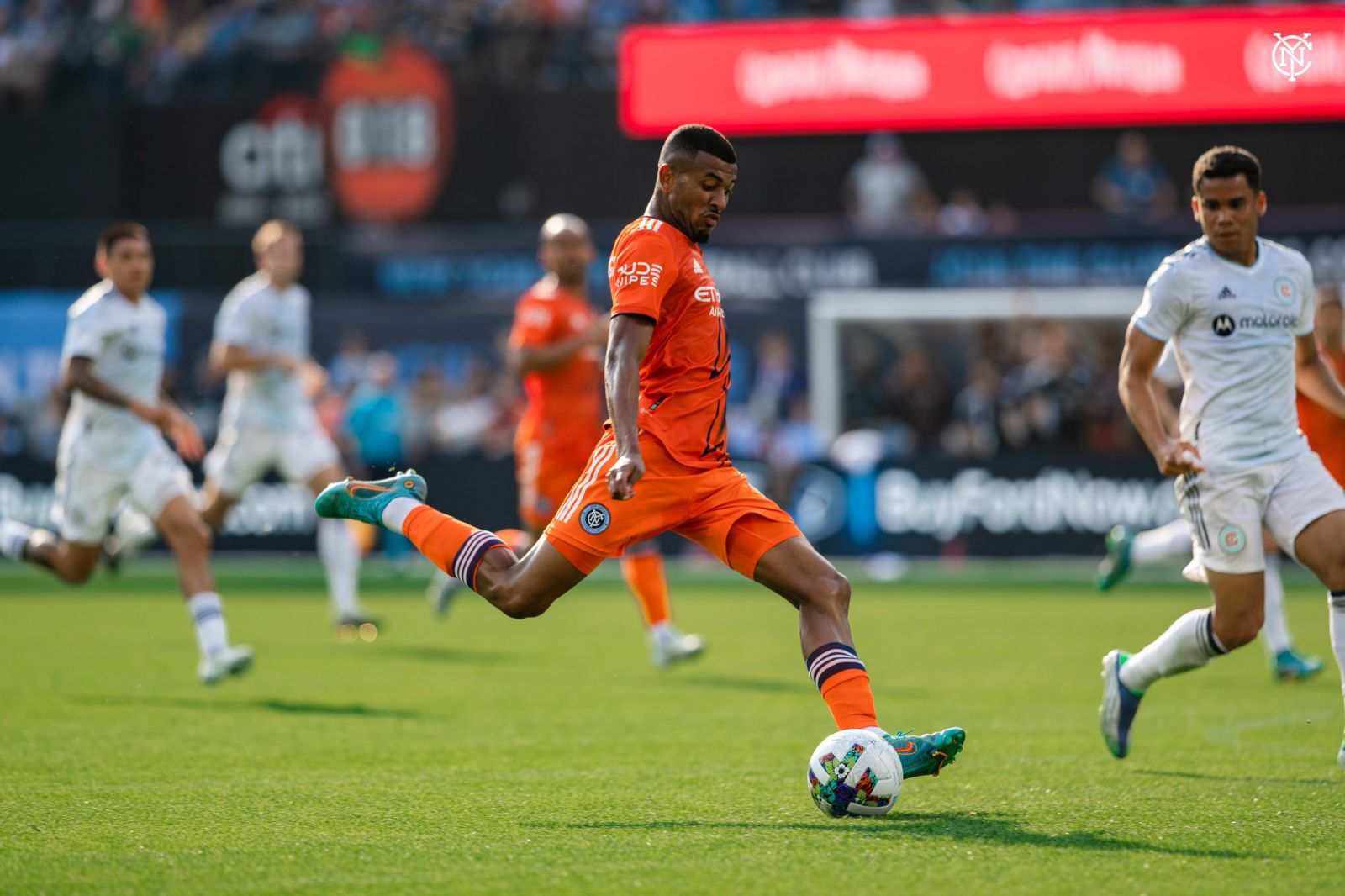 Photo courtesy of NYCFC.com
Article by Scott Churchson, The Sports Den & The Sports Insiders
Host and Journalist Spanglish World Networks, Spanglish Sports World
New York. - The New York City Football Club continue their unbeaten streak with a 1-0 win over the struggling Chicago Fire on Sunday and in the process, set a new team mark with 5 consecutive clean sheets. Scoring their lone goal would come on a penalty kick from Heber in the 23rd minute after a questionable handball call inside the box on Miguel Angel Navarro that officials rules a penalty. With Striker Taty Castellanos out due to yellow card suspension Heber's second goal of the season would prove to be the difference maker as the team rifled off 15 shots in total with 2 bouncing off the crossbar. Additionally, the Gents in Blue (or in fact Orange on Sunday) came just minutes away from setting a new MLS record by holding the opposing team without a shot on goal for three straight matches, however goal keeper Sean Johnson was forced to make an easy save in the final minutes of additional time to keep NYCFC out of the MLS record books.

With Philadelphia winning their match on the road against Western Conference Champions Portland in the late game, NYCFC stays in 2nd place overall in the East with one game in hand thanks to their continual MLS unbeaten streak, now at 7 games and a 6-0-1 record. Next up in the Round of 16 US Open on Wednesday at Belson Stadium against the visiting New England Revolution then they travel to Minnesota to take on the 8th place United on Saturday night.
5 Notes:

1) The last time the team lost a match of any sort was in the first match of the CONCACAF Semi-Finals to Seattle back on April 6. Since they across MLS, Champion's League and now the U.S. Open NYCFC has gone a staggering 7-0-2 in their past 9, outscoring their opponents 22-6 during that span.

2) Right now NYCFC sits at a solid 7-3-2 record and 23 points for the season. By contrast last season it took them to July 30th to reach that mark. However much like last year the team's goal differential is highest in the league at 14.

3) With his latest Clean Sheet Goalkeeper Sean Johnson now leads the league with 7. Furthermore his Goals Against Average has dropped to 0.83, good for second place in the East (behind Andre Blake of Philadelphia) & 3rd overall in the league.

4) New England has struggled this year as opposed to last season when they set an MLS record with 73 points in the regular season. This year they're 4-5-3  in 12 games and sitting in 9th place in the East. Much of it stems from the fact that the Revs have given up 22 goals so far in 12 matches, compared to 41 in 34 matches last season.

5) Returning to the lineup will be Taty Castellanos with 2 goals in his last two matches & goals in 4 of his last 5, including a 4 goal barrage against Real Salt Lake back on April 17.
FIFA Concacaf MLS Soccer NYCFC Chicago Fire NYCFC.com Scott Churchson The Sports Den Spanglish Sports World Spanglish World Networks Zingo TV