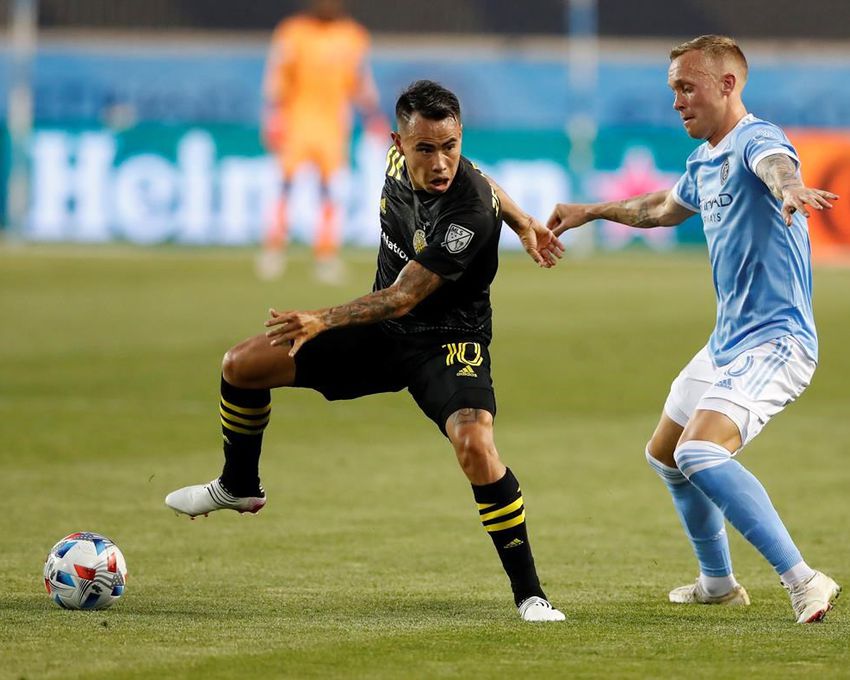 Photo courtesy of Noah K. Murray,  AP
Article by Robin Gwiazdowski IG: @RobinGwiazdowski
Columnist and Host Spanglish Sports World & Spanglish World Networks
TORONTO. - Ah, spring, the time of year where I can’t wait to get back to the stadium.  The sun on my face, the crack of the bat, the roar of the crowd, the taste of ice cream eaten from a tiny batting helmet.  And here I am, in Red Bull Arena, which is as gorgeous and well maintained as CitiField or Camden Yards.  But there’s no diamond, no bats, the ball is much bigger.  They’re wearing shorts.  There’s a DJ?  And a band?  So begins this baseball fan’s introduction to covering major league soccer.
The word soccer conjures up several images for me.  I see my nephew’s (and husband’s on 1980s home video) games as a 4 and 5 year old where all you see is a ton of little legs running after a ball.  I think of my friends with deep roots in Europe and South America screaming as if their life depended on it during the World Cup, and that announcer yelling GOOOOOOAAAAAAALLL.  As a self-professed Anglophile, I think of the rich football tradition in the UK and the impact it has had on their culture that is so like that of baseball and American football in the US.
When you produce a sports talk show, you often pull double or triple duty.  I’ve rearranged sets, coordinated wardrobe, done camera work, and even appeared on camera once or twice, so when one of our reporters couldn’t make it to the match, I pinch hit there too.  But what does a baseball fan know about soccer?  Enough not to try to hold my own with sportswriters who have played the game since they could walk, so instead I give you the match from a baseball fan’s perspective.
The energy in the stands is electric, yet there is a politeness I’ve not seen at other sporting events.  There’s a true sense of being part of a global community.  The athleticism is superb.  The scoring is low with very few shots on goal in a defense-heavy sport.  The injuries are as outlandish as they appear on YouTube compilations, although the fans call the players out for it.  It’s (thankfully) not quite the crack of the bat, but there is a particularly satisfying noise made when someone heads the ball.
The NYCFC started the match strong with Ismael Tajouri-Shradi scoring the first goal, and his first goal of the season, at the 18-minute mark with an assist from Valentin Castellanos.  They dominated the first half with 13 shots and 3 shots on goal compared to a paltry 2 shots by the Columbus Crew.  The second half told a different story as Columbus outshot NYCFC 7-4 and 3-1 in shots on goal to level the playing field.  The star of the match was Lucas Zelarayán who scored two goals at minute 82 and 90+5, both off free kicks, to secure a win for Columbus.
The loss was tough for the coaches, players, and fans of NYCFC.  While Columbus celebrated, Sebastien Ibeagha couldn’t hide his frustration leaving the field as the free kick which scored the winning goal was a result of a yellow card shown him at 90’+4’. Head Coach Ronny Deila and lone scorer Ismael Tajouri-Shradi appeared dejected during the post-game press conference.  I compare the performance of NYCFC to my beloved New York Mets – they both often start off strong then miss several opportunities to score, lose momentum, and end with a loss.  Whether for this reason, or simply the energy, action, athleticism, and heart displayed in this match, MLS and the NYCFC gained a new fan tonight.

New York City FC Head Coach Ronny Deila:
On the result...
“Very tough results in this game...Today we are really organized, we are working really hard as a Club, we create quite more, so in that way I'm very happy with a lot of things the boys are doing, but of course you see that losing that way is terrible."

New York City FC Forward Ismael Tajouri-Shradi:
On scoring his first goal of the season tonight...
"I had a few chances where the ball did not want to go in, but I am more than happy today that the ball finally found the net. It was a great feeling for me and was good for the team, but in the end if you don't get the 3 points the goal doesn't mean anything. I am happy to score but we wanted to get the 3 points."
MLS Soccer CONCACAF NYCFC Columbus Crew LAFC Red Bull Arena Ronny Delia Ismael Tajouri-Shradi Valentin Castellanos Lucas Zelaray Spanglish Sports World Spanglish World Network Robin Gwiazdowski Noah K. Murray AP