The NFL is Fading, and That’s a Shame 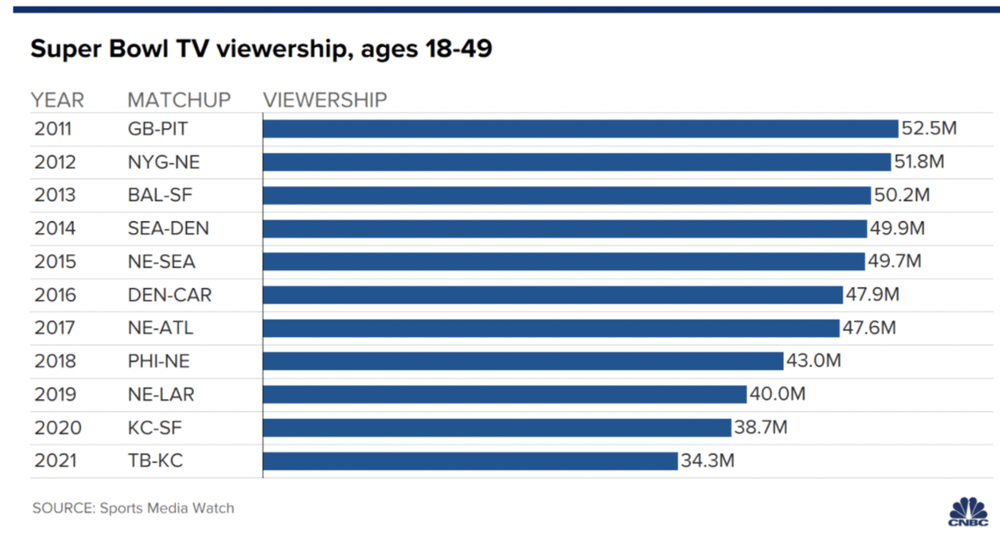 Photo courtesy of CNBC
Article by Scott Churchson, The Sports Den & The Sports Insiders
Host and Journalist Spanglish World Networks, Spanglish Sports World
New York. -  Over the last weekend the NFL had a playoff weekend the likes of which I don’t remember in nearly 40 years of being a fan. 4 games, three ending in a game winning field goal and the fourth ending in a game winning touchdown in overtime between two teams with some of the biggest fan bases in the league. 4 games, and a combined score differential of just 15 points (which beats the previous NFL record for this round of playoff action of 18) and gave old fans like me enthusiasm for next week and certainly helped new fans get into the game.
Having said that, that was a week for the ages. However there’s a massive issue in the NFL these days that isn’t discussed much. If you read my stuff, you know I’m all about numbers and statistics. Numbers tell a story in a way humans can’t and there are some very telling numbers with regards to the NFL’s biggest stage, the Super Bowl. And that stat is the habitual decline in ratings of the biggest game of the season in the always important 18-49 market. Breaking it down:
In 2012 saw 51.8 million viewers in the 18-49 market watch the Giants upset the Patriots yet again, a whopping 40.5 television rating. Fast forward to 2020 (Covid was barely a thing back then BTW) and those numbers had declined to 38.7 million and a 29.9 rating; an over 25% drop in both categories. Not only were both those numbers the lowest the Super Bowl had seen in the vaunted 18-49 market, but every single year since 2012 both those numbers were lower than they were the year previously (If you’re wondering, last year during Covid saw a 26.5 and 34.3 respectively). Literally every single year the Super Bowl has drawn worse ratings in the 18-49 market than the year before. Every year since 2012.
This is a massive concern for the NFL. The younger generation is a mobile phone generation, not a park in front of the TV generation like I was and our parents were. Sports is becoming background noise to Gen Z and beyond and it’s only going to continue. So what needs to be done to reach that target? For starters you need to take a page from ESports and learn from that. ESports is popular because they aren’t watching, they’re doing. And if they aren’t doing, they’re learning by watching others to strengthen their own EGame. You need to take a page from that. Take a page from the Fan Controlled Football league. Among several smart rules in the league it allows the fans to vote in real time on what play their team has to run. I love that, give your fans a chance to connect with the product. That’s the future of sports, not just tomorrow, but especially 5, 10, 20 years from now.
In the end, the NFL probably won’t do what I feel it should. You had a phenomenal playoff weekend last round, one for the ages. But if we’re lucky enough to see it again a decade from now, you may not have fans to actually see it. The future waits for no one.
NFL NFLPA NFL Media Watch CNBC NFL.com Scott Churchson The Sports Den The NFL Insiders Spanglish Sports World Spanglish World Networks Zingo TV