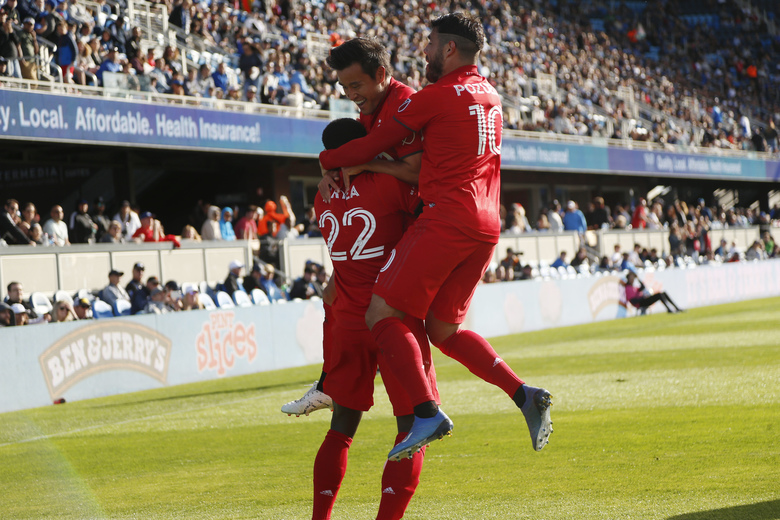 Photo courtesy of Jed Jacobsohn, AP
By Diego Murguia, BarnBurner.ca
TORONTO. - Toronto FC opening match against San Jose Earthquake tied at the last second. Oswaldo Alanis scored on the last free-kick of the game to tie 2-2 in its home opener against Toronto.
Alanis is a one-year loan player from Mexico’s Chivas de Guadalajara. Matias Almeyda and Alanis had worked together in Chivas in 2018 when the Mexican team beat Toronto on penalties, (4-2), in the CONCACAF Champions League Final that year.
Nick Lima dribbled the ball on the left side of the pitch, cut to his right and shot it from outside the bigger box, but Quentin Westberg made a quality safe.
In a corner kick for the TFC, Jozy Altidore went down after Andy Rios grabbed him in the penalty spot.
Alejandro Pozuelo, the Spanish striker, scored on the penalty kick in the 40th minute.
The Earthquakes had a chance to score and tied the game before the halftime, but Danny Hoesen's shot hit the side netting.
Toronto ended the halftime with a goal lead.
In the second half, TFC' extended their lead 2-0 in the 51st minute, when Tsubasa Endoh shot, and Werberg deflected it, but Richie Laryea got the rebound to put the ball in the back of the net.
A couple of minutes later, San Jose scored their first goal to short the lead 2-1. Christian Espinoza dribbled from the right side of the pitch and crossed the ball, and Andy Rios tapped the ball into the furthest post.
The match tightened up afterwards with few opportunities for both teams.
San Jose had the last free-kick. Alanis took the ball on the right side of the pitch, almost as a corner, and hit the ball on the left top corner to beat Werberg and tied the game in the 95th minute.
Toronto blew the 2-0 lead at the last play, and both teams will share points.
TFC is third place with its first point on the East Conference, while the Quakes are in fourth on the Western Conference with the same points.
Toronto hosts New York City FC on March 7th.