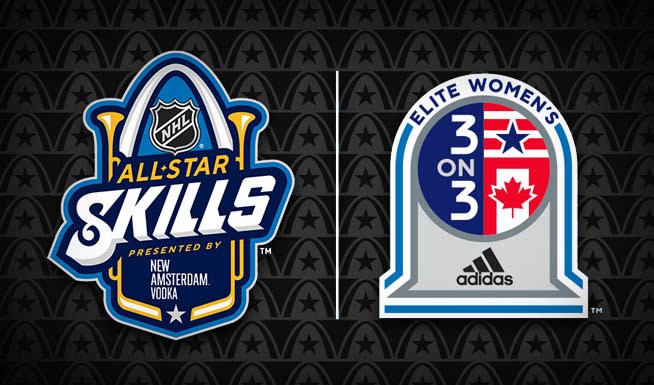 Photos courtesy of NHL.com
By Jarred Bapty, BarnBurner.ca
Toronto. - Some have already called it the ‘perfect weekend’ for women’s hockey.
The Women’s Elite 3-on-3 matchup between Canada and the United States saw the top women representing their countries play two 10-minute periods of 3-on-3 hockey and truly put on a show.
Ann-Renee Desbiens was stellar in net for Team Canada, stopping 15 of 16 shots she faces and making some incredible saves in the process.
Rebecca Johnston opened the scoring just 54 seconds in with a great breakaway head-fake on Alex Cavallini. Mélodie Daoust made it 2-0 at 2:25 of the 2nd when she broke into the zone and had ample time to pick her spot; low on Cavallini’s blocker side.
Two minutes later, Hilary Knight finished off a breakaway of her own with a backhander past Desbiens for the only American goal. The United States also mustered 16 shots to equal Canada’s tally.
USA continued to press for the tying goal and Amanda Kessel blasted a one-timer at the buzzer that Desbiens snagged to seal the win for Canada.
It was an action-packed 20 minutes of fast-paced, high-skill hockey and another major step in the future of women’s hockey.
"It's kind of a crazy feeling," said Natalie Spooner to nhl.com. "Even when we were getting called out for the first lineup, I was like, 'Wow, this is amazing.' We're actually here. We're at the NHL All-Star Weekend and we're going to get to play and we're going to get to showcase our talent.’”
Team coaches Cammi Granato and Jayna Hefford made a wager on the game over twitter with drinks on the loser and Budweiser Canada chipped in to provide the beverages. So, after the game, Granato led the Americans with a cart of Budweiser and presented it to the Canadian squad for the victory.
It's the third year in a row the women have been invited to the NHL All-Star Game and, each year, they’ve achieved a new level of recognition. Kendall Coyne Schofield’s skate last year opened a lot of minds to the level of skill the women possess, and this season’s 3-on-3 competition pushed that open-mindedness to new heights.
Knight and Marie-Philip Poulin also partook in the Shooting Stars event at the skills competition, in which players had to hit targets on the ice from an elevated platform similar to Top Golf. Poulin accumulated 15 points, while Knight hit 14. Knight’s score tied Tyler Seguin and beat David Pasternak and Brady Tkachuk. Patrick Kane topped Mitch Marner in an extra frame of the event.
Shea Weber won the Hardest Shot for the third time with a 106.5 mph shot, Matt Barzal beat Connor McDavid by 0.04 in the Fastest Skater competition, and Jordan Binnington won the NHL Save Streak Challenge.
Tomas Hertl scored the 5-4 winner for the Pacific Division over the Atlantic Division in the All-Star Championship game Saturday Night.