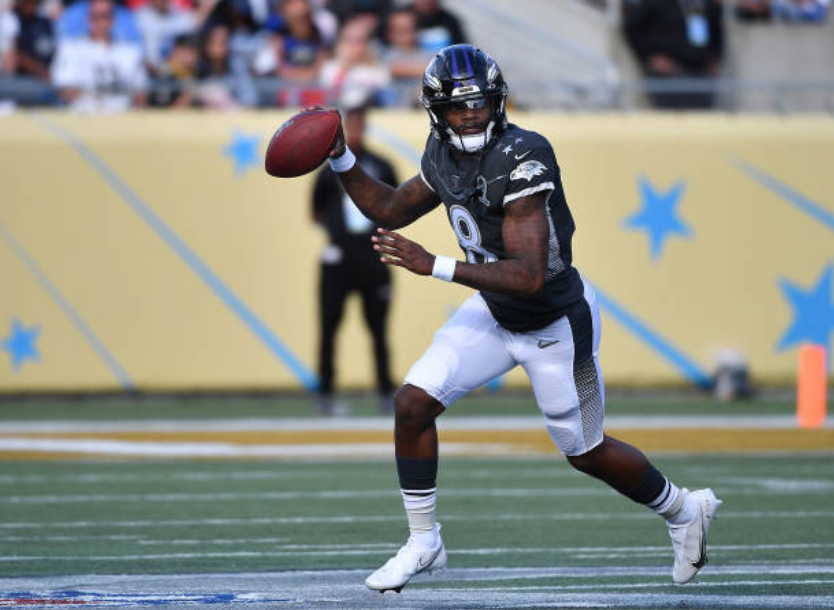 Photo courtesy of Vavel.com, Mark Brown, Getty Images
By Jake Carter, BarnBurner.ca
Toronto. - The Pro Bowl is a celebratory event that features some of the league’s best players. But on Sunday in Orlando, there was more than the game that was celebrated. They celebrated someone who transcended sports, who was a true superstar, and who was one of the best players in NBA history. Kobe Bryant.
Several players repeatedly paid homage to the late NBA great throughout the game, as the AFC defeated the NFC 38-33.
Green Bay linebacker Za’Darius Smith organized a last-minute tribute to Bryant shortly before the game. Smith and his teammates learned about Bryant’s passing before the game and wanted to honour him. So, they decided to mimic his fadeaway jump shot after big plays.
It was just one of the ways that the players paid tribute to the retired NBA star on a somber day. Bryant, his 13-year-old daughter Gianna, and seven others passed away earlier in the day in a tragic helicopter crash in California.
Smith, who organized the tribute, had a direct response after the game. "I don't even want to talk about it anymore," Smith told reporters. "I don't want to get emotional."
The NFL also held a moment of silence during the two-minute warning in the first half in memory of Bryant. They showed his picture on the video boards while announcing the tragic news of his passing.
Apart from the Bryant tributes, the game was a high-scoring affair. The teams combined for a whopping 834 yards and ten touchdowns.
Baltimore quarterback Lamar Jackson threw for 185 yards and two touchdowns with an interception. He was named the offensive MVP.
It was a 7-7 game after the opening quarter before the AFC outscored the NFC 17-7 in the second quarter to take a 24-14 lead at the half.
The NFC scored next, with Philadelphia defensive tackle Fletcher Cox returning an interception 61 yards for a touchdown. Minnesota’s Harrison Smith intercepted the pass from Deshaun Watson at the 3-yard line and ran it to the 39-yard line before lateraling it to Cox. That score made it a 24-21 game.
The NFC took the lead after that. Packers receiver Davante Adams took a 13-yard pass from Vikings quarterback Kirk Cousins to make it a 27-24 game.
After the play, Adams pointed to the sky and showed the number 24 on his gloves as a tribute to Bryant’s jersey number.
With the AFC up 31-27 in the fourth quarter, they added to their lead. Pittsburgh linebacker T.J. Watt recovered a fumble on the AFC 9-yard line and took it 82 yards for the touchdown. With that score, it was 38-27.
The NFC countered with a touchdown of their own, as Adams caught a 4-yard pass from Cousins. They attempted a two-point conversion, but Cousins was sacked. That made it 38-33 for the AFC.
The NFC tried to use a new rule to take the lead. The rule allows the scoring team to retain possession by facing a fourth-and-15 play from its own 25-yard line. Cousins went for a deep pass but was intercepted by Ravens safety Earl Thomas.