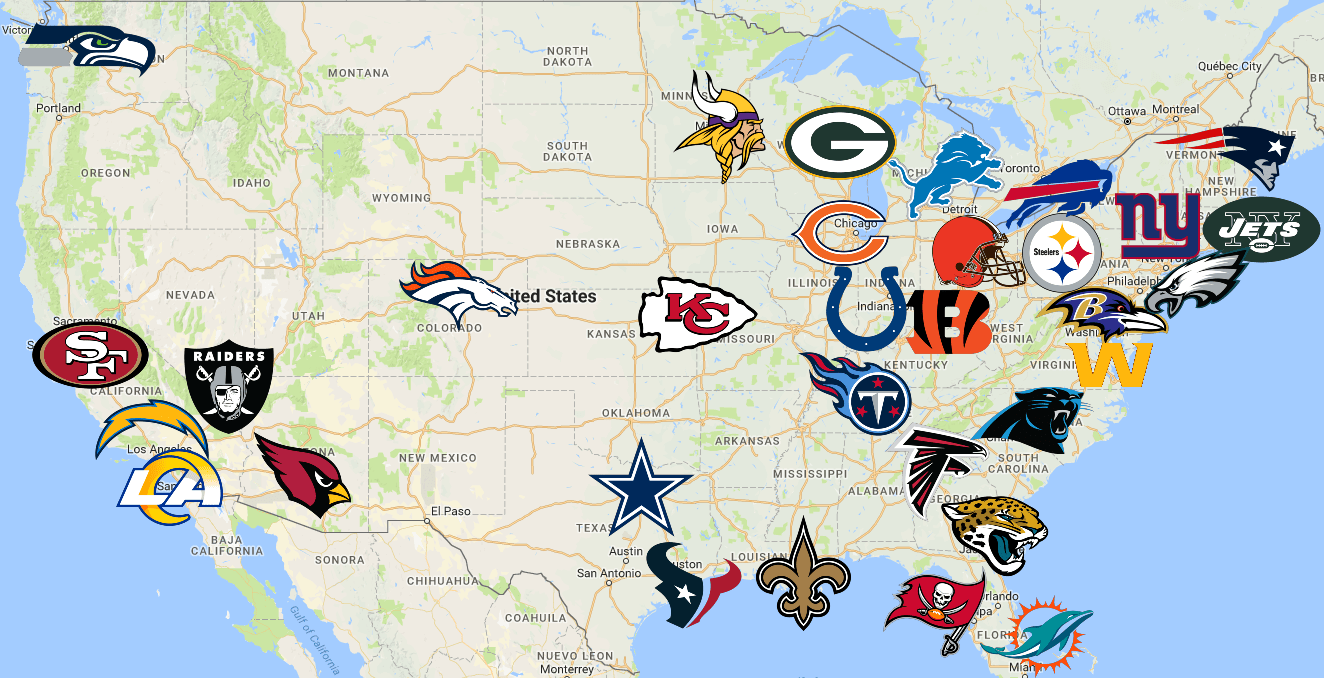 Photo courtesy of sportleaguemaps.com
Article by Scott Churchson IG: @schurchson
Columnist and Host Spanglish World Networks, Spanglish Sports World
New York. - Well it’s gone by in a blink of an eye, but here we are, already approaching the midway point of the 2021 NFL season, a date much more difficult to predict with the NFL’s new 17 game schedule. Having said that here’s 10 facts about this season that can you can drop anytime, anywhere to help impress friends, family and the internet with your copious knowledge of football minutiae:
1) The Cardinals are the only unbeaten team in the NFL. As the NFL’s oldest franchise, their history hasn’t been great. They haven’t won a championship since 1947 (when they were the Chicago Cardinals) and own the 3rd worst team win percentage in history at .426.
2) The Giants and Jets suck…again. For those of us in the NY area, the teams in East Rutherford provide endless pain. At a combined 3-10 (with the Giants at 2-5) they are tied with the most losses since 2017 at 51. The Lions and Jags sit next at 47. Neither team will give up that distinction for at least 5 years.
3) Tom Brady continues to Goat. At the ripe young age of 44 he’s averaging 325 passing yards per game with 21 TDS to only 3 INTs and a 108 QB rating.
4) Geno Smith continues to be the starter in Seattle while Russell Wilson is on the mend. So far he’s been solid in 2 starts plus a third game, posting a 92.9 QB rating. However he’ll forever be the answer to the trivia question: Who started that one game in 2017 when Eli Manning was a healthy scratch and ended his record consecutive start streak of 210 games?
5) Patrick Mahomes is currently tied with the Jets Zach Wilson for most interceptions with 9. Huh.
6) Derrick Henry of the Titans is a beast. At 869 yards rushing, not only is he first in the league, Jonathan Taylor of the Colts in second best with 579 yards. Also his 18 catches is one off his career mark of 19 and could break his own career mark just 8 games into the season. Bo Jackson in Tecmo Bowl anyone?
7) Tale of Two Cities: The Detroit Lions are the only winless team in the NFL at 0-7, now with Jared Goff at the helm. Meanwhile the team he was traded from the L.A. Rams and the QB he was traded FOR in Matthew Stafford sit at 6-1.
8) Speaking of Matt Stafford, the man has to be on Cloud 9. After only 3 playoff games in his 12 years in Detroit, he currently has the second highest QB rating for QBs with 7 games this season at 116.7, only .1 point behind NFC West rival Kyler Murray.
9) It pains me to say it, but respect to the Dallas Cowboys. “America's Team” (a name I heavily disagree with) is running away with the NFC East at 5-1, their best start since 2016. It's been 25 years since they last appeared in an NFC championship game although not the worst current drought; the Cincinnati Bengals hold that honor at 32 years.

10) Lastly, the New York Jets have the lowest average points per game this season at 13.3 which is worse than their league leading NFL worst 15.2 last season.

And that'll do it. 10 facts you can drop to show your sports knowledge to impress your friends, random strangers at the bar or just random people on the internet. I'm Scott, have a good one.
NFL NFLPA sportleaguemaps.com Scott Churchson The Sports Den The NFL Insiders Spanglish World Networks Spanglish Sports World Zingo TV