Castellanos Starts 2022 Like He Left 2021, NYCFC Gets 2-0 in CONCACAF Champions League 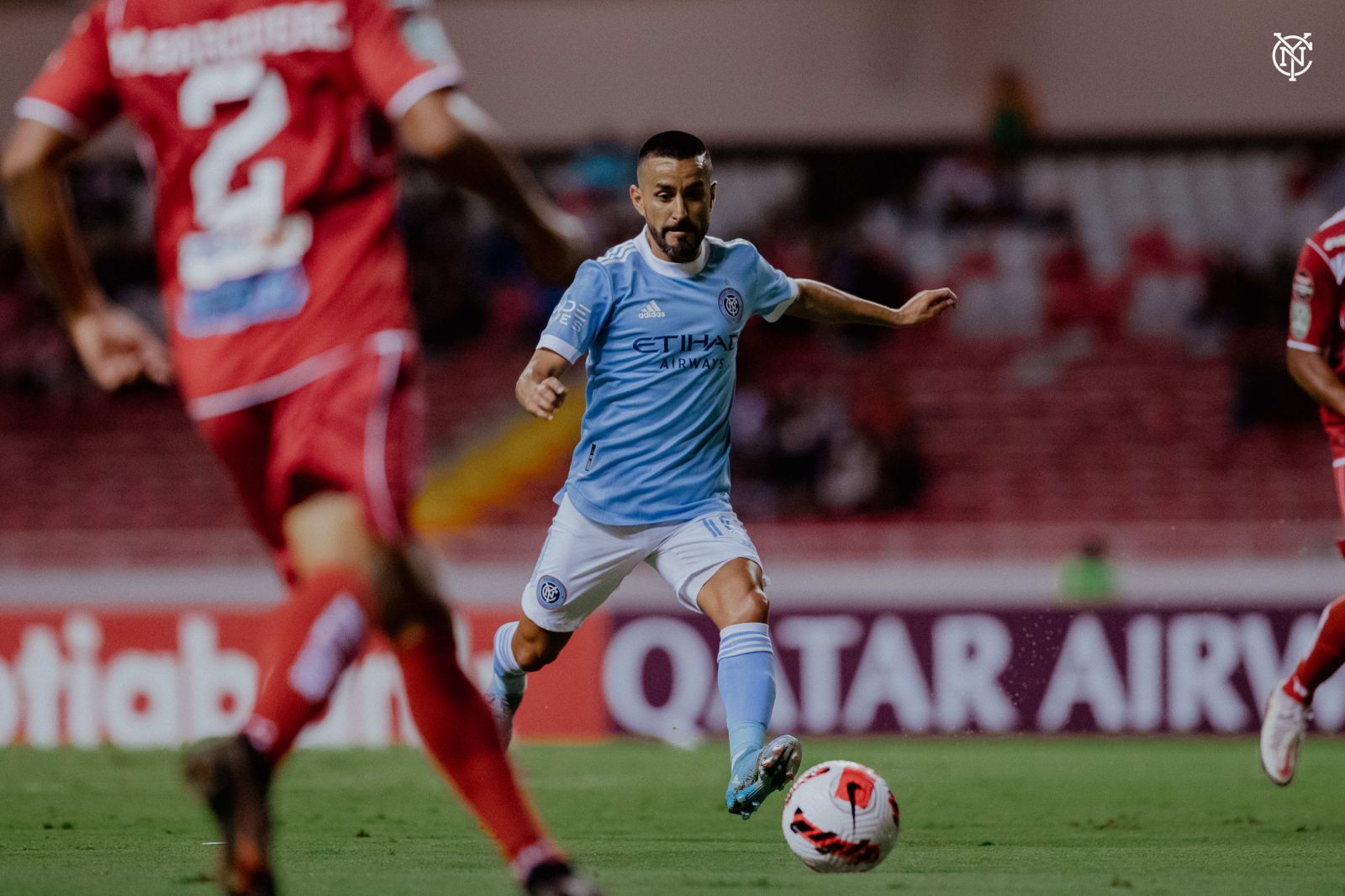 Photo courtesy of Brian Murphy, Icon Sportswire, Imago Images
Article by Scott Churchson, The Sports Den & The Sports Insiders
Host and Journalist Spanglish World Networks, Spanglish Sports World
New York. - The NYC FC 2022 campaign picked up right where it left off from last season as Taty Castellanos scored 2 goals on route to a shut out win against Santos de Guapiles in the opening round of the CONCACAF Champions League. On a night where goalie Sean Johnson did not even have to field a shot on goal until late in the second half, the gents in blue needed all of 5 minutes to get the scoring going as Castellanos scored from the penalty spot on a match that could have easily been 4, even 5 goals for the New York Club.
Quoting head coach Ronny Deila, “We had full control of the game; you can see that (Santos) didn’t create anything. Even with 10-men we were really solid and disciplined, also the big chances we created, we should have scored a little more. When we got the ball to the front three players, we created chances over and over again.”
The 10 men was in reference to a red card on midfielder Santiago Rodriguez in the 68th minute, opening up an opportunity for Santos that amounted to one single shot on goal late.
In a rematch the two teams meet again for CONCACAF on February 23, this time as New York is the home team, but playing their home game in LA. As if playing half their home games last year in New Jersey wasn’t far enough. They’ll stay out as their regular MLS season will start 4 days later against the Galaxy.
3 Notes:
1)    Going back to October 23 of last season, Taty Castellanos has scored in each of his last 8 matches, scoring 11. The club turned down an offer of near 10 million dollars from the Argetnine team River Plate. Castellanos, who has desire to play in his home country, will no doubt be subject to trade rumors for much of the season. However with 2nd and 3rd leading goal scorers Jesus Medina and Ismael Tajouri-Shradi no longer with the team they will need his foot to once again stay competitive.
2)    This MLS season NYCFC will be calling Citi Field it’s first backup home, with Red Bull Arena being the 3rd option if both Yankee Stadium and Citi Field are unavailable after the habitual outcry (including by it’s own broadcasters) of having to play home games at a rival’s stadium. Citi Field isn’t full time Yankee Stadium, but a far better option for New York fans who often rely solely on public transportation; making commuting to New Jersey near impossible. Additionally given how the current MLB negotiations are going the longer the strike runs the more likely the only games being played at Yankee Stadium will be NYCFC. Citizens are rejoicing in unison.
3)    As mentioned, their first MLS matchup will be on February 27th on the road against the LA Galaxy. The Galaxy narrowly missed a playoff spot last year with a 48 points tie with 7th place Real Salt Lake but split the season series with less wins and a worse goal differential. The team will again be relying on Javier “Chicarito” Hernandez who’s 17 of the team’s 47 goals was top for the team by a wide margin.
FIFA CONCACAF CONCACAF Champions League MLS Soccer NYCFC Santos de Guápiles NYCFC.com Scott Churchson The Sports Den The Sports Insiders Spanglish World Networks Spanglish Sports World