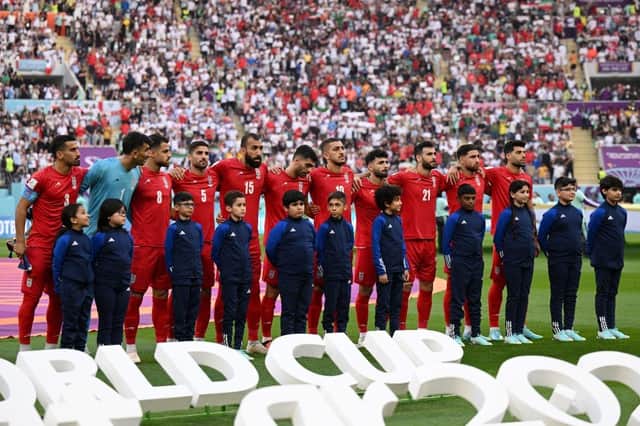 Photo courtesy of  Matthias Hangst, Getty Images
Alireza Beiranvand. Sadegh Moharrami. Morteza Pouraliganji. Rouzbeh Cheshmi. Majid Hosseini. Milad Mohammad. Alireza Jahanbakhsh. Ahmad Nourollahi. Ali Karimi. Ehsan Hajsafi. Mehdi Taremi.
Article courtesy of Joel Sked, Scotsman.com
DOHA, Qatar. - Eleven men who took a notable stand. As the national anthem of the Islamic Republic of Iran played in the Khalifa International Stadium, they stayed silent. The camera drifted across and one-by-one it was met with a steely and even contemptuous expression from Iran’s national team in front of the watching world ahead of their World Cup opener against England which they lost 6-2. It was a statement. A message of support to those who have suffered and continue to suffer back home. A brave one considering the repercussions Team Melli could face. Hundreds have died amongst protests aimed at the regime leading the country, headed by Supreme Leader Ali Khamenei, while thousands have been arrested by the morality police.
It was a stand backed by many Iranians in the stadium. “The reaction from the Iranians to their own national anthem was telling,” BBC commentator Guy Mowbray said. “It was overwhelming and not in favor.” They whistled, held up messages and even cried.
Contrast that with the build-up. FIFA wanted football to be the focus once the tournament started. It hasn’t. Ahead of this fixture it surrounded an armband. Harry Kane, as well as other captains from European nations, were to wear a ‘One Love’ armband which supports inclusion and is seen as a message to Qatar's view on the LGBT community. That was until FIFA intervened, despite knowing fine well this was the plan, at the 11th hour. They spoke of punishments with suggestions of yellow cards. The reaction from England was spineless, the armband discarded. Iran’s spine was intact, they showed how to be brave, how not to be selfish.
Now, the football. England are going to win the World Cup. Alan Shearer, Rio Ferdinand and Gary Lineker had the St George’s Cross bunting out in the BBC studio with Micah Richards personifying the England Band and their impressive ability to rile up even the most laid back of viewers.
It should be said, Gareth Southgate’s men were resplendent. Jude Bellingham was the star of the show. Rangers fans will know fine well the talent the Borussia Dortmund midfielder possesses. He was everywhere, breaking up play, linking, committing opponents, breaking lines with penetrating passes and scoring, heading England in front. From that moment, the game was over. Mason Mount schemed, while Bukayo Saka had his redemption story for England on the big stage, scoring twice. Raheem Sterling was at his menacing best and netted. It was all connected by some expert forward play by Harry Kane. He may not have scored but displayed his creative skills. Subs Marcus Rashford and Jack Grealish also scored.
England, coming into the tournament without a win in six, looked very slick and very quick, dispelling doubts that they have little chance of success. Minutes after the full-time whistle, PR emails notifying of England’s price being cut to win it were dropping into inboxes. But it should be tempered by their opponents. With Sardar Azmoun on the bench, they gave Qatar a run for their money in terms of incompetence, especially in defence.
FIFA QATAR 2022 England Iran Joel Sked Scotsman.com Matthias Hangst Getty Images Spanglish World Network Spanglish Sports World La Ronda del Dia World Soccer Report La Portada Canada