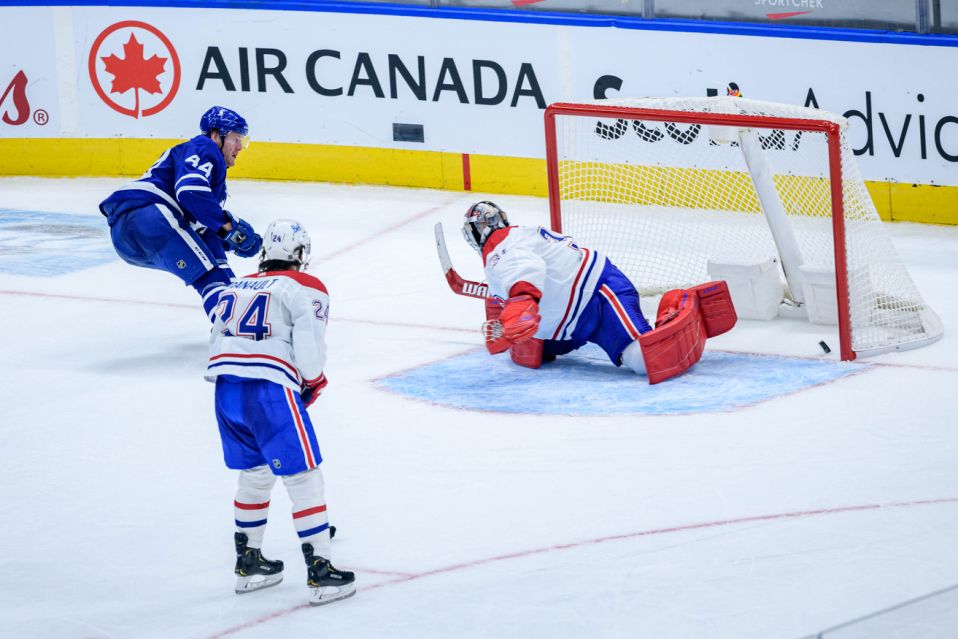 Photo courtesy of Julian Avram, Icon Sportswire, Getty Images
By Mark Freitas, BarnBurner Network
TORONTO. - The Toronto Maple Leafs defeated the Montreal Canadiens 5-4 in overtime in the season opener at the Scotiabank Arena.
Both teams had new faces in their lineups as for Montreal, they had Josh Anderson, Tyler Toffoli and Joel Edmundson. On the Leafs side, we saw new faces in TJ Brodie, Wayne Simmonds, Zach Bogosian, Jimmy Vesey, and Joe Thornton.
In the first period, the Canadiens were all over Toronto. Outshooting them 11-7. Nick Suzuki picked up where he left off in the bubble, getting the first goal of the game and the season on the power play giving the Habs a 1-0 lead. The Leafs would respond shortly after as William Nylander fired a long-range shot beating Carey Price to tie the game 1-1. Montreal would strike with 23 seconds left in the first as Josh Anderson scored his first goal as a Canadian, putting the Habs back up 2-1 at the end of the first.
Heading into the second period the Canadiens picked up where they left off as Tomas Tatar put the Habs up 3-1 on a power-play goal on a breakaway as the Leafs did a bad line change. Wayne Simmonds gave the Maple Leafs a much-needed spark as he and Ben Chiarot got five minutes for fighting. The Leafs would cut the lead down to one when William Nylander notched his second goal of the game scoring on the power play with a beautiful wrist shot making it a 3-2 game. A few minutes later Montreal got two penalties back-to-back and this would put the Leafs back on the power play with a five on three and the Leafs capitalized tying the game at three with John Tavares tipping in a Mitch Marner pass.
Going into the third, the Habs struck fast as Josh Anderson got his second of the night after he slipped by John Tavares and snuck one by Fredrick Andersen giving Montreal the lead 4-3. The Leafs once again tied the game at four with Jimmy Vesey getting his first goal as a Leaf and this would also be William Nylander’s third point of the night.
We head into overtime and the pace went back and forth. Toronto would then get a two-on-one rush and John Tavares would pass the puck to Morgan Rielly who would knock the puck past Carey Price and the Leafs picked up their first win of the season 5-4.
Frederik Andersen stopped 28 out of 32 shots as he came up big in overtime.
The Leafs will be back in action this Friday as they are set to be on the road for a back-to-back against the Ottawa Senators at 7:00 pm EST / 4:00 pm CST.
Julian Avram Icon Sportswire Getty Images Toronto Maple Leafs Montreal Canadiens NHL NHLPA Maple Leafs Sports & Entertainment Scotiabank Arena