NYCFC Finish 4-0-1 On Homestand, End With 2-0 Win Against Columbus 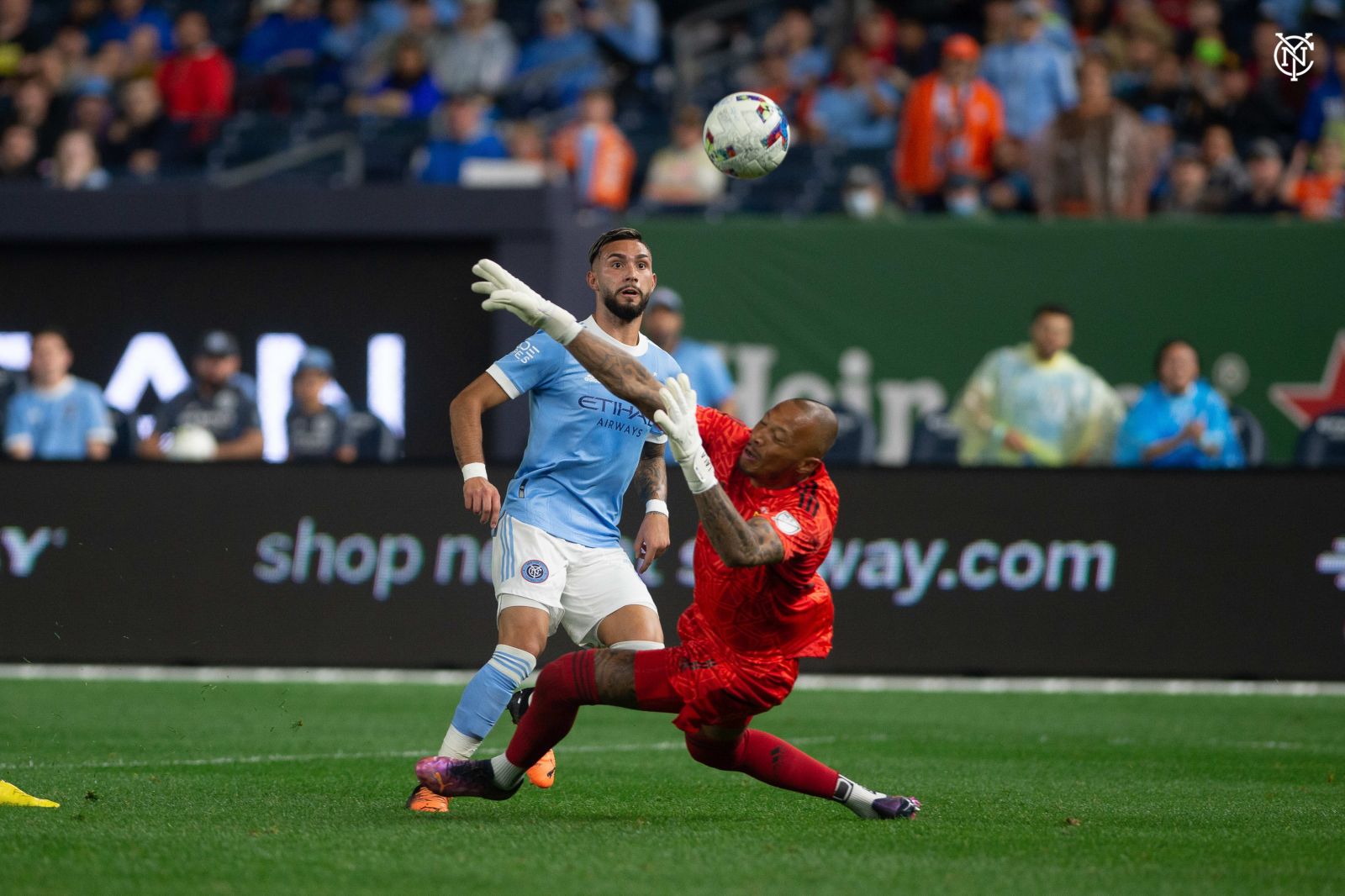 Photo courtesy of NYCFC.com
Article by Scott Churchson, The Sports Den & The Sports Insiders
Host and Journalist Spanglish World Networks, Spanglish Sports World
New York. - It took NYCFC all of 9 minutes to score what ended up being the winning goal as NYCFC ends the 5 game homestand with 13 out of a possible 15 points. Talles Magno, who currently leads the East in assists picked up his second goal of the year after taking a pass from Santiago Rodriguez inside the far post for the early 1-0 lead. Much of the first half was a struggle however as Columbus has several opportunities which head coach Ronny Deila attributed to playing too slow but credited goalie Sean Johnson and the central defenders for keeping the Crew off the board.

Taty Castellanos, returning to the lineup after missing both an MLS match and a US Open match to injury, made his presence felt in the 57th minute knocking in a header off the near post for a 2-0 score which Columbus was unable to overcome for his 6th goal of the year. The Crew despite 9 shots and a few near misses (most of which were in the first half) never registered a shot on goal the entire evening while NYCFC continued heavy pressure with several opportunities of their own but ending with the 2-0 final and New York's 3rd straight clean sheet and 4th in their last 5 matches.
Next up, for the Gents In Blue as they sit in 6th place they travel to DC to face the 4-5-1 United on Wednesday night; themselves coming off a 2-2 tie on the road against Miami Saturday night.
5 Notes:
1) NYCFC is still seeking its first road win of the season, having gone 0-2-1 so far. DC on the other hand is 3-3-0 at home and have a 2 game win streak at Audi Field. In 10 matches dating back to 2015 NYCFC sits with a 5-2-3 record, including 2-1 in 3 matches last season.
2) With his 6th goal of the season Taty Castellanos pulls into second overall in goals in the east behind Jesus Jimenez of Toronto who has played 12 matches to Taty’s 9.
3) DC United thus far has 14 goals on the season, with 10 of them coming from Ola Kamara and new addition Taxiarchas Fountas (both with 5). Head coach Ronny Deila admitted he hadn’t seen much footage on them as yet, but said he and his team will be studying from Sunday to Tuesday.
4) With 21 goals, NYCFC now has an 11 goal differential which is highest in the East and good to be tied for second overall in the league. 20 of those goals have come at home however with their lone goal on the road coming in a loss to Toronto in early April.
5)  Talles Magno continues to improve and impress with 5 assists on the season seeing him with Santiago Rodriguez for the team lead and good for best in the east. This is an area of noted improvement over last season when Maxi Moralez lead the team with 11 goals in 30 matches.
FIFA Concacaf MLS Soccer NYCFC Columbus Crew NYCFC.com Scott Churchson The Sports Den Spanglish Sports World Spanglish World Networks Zingo TV