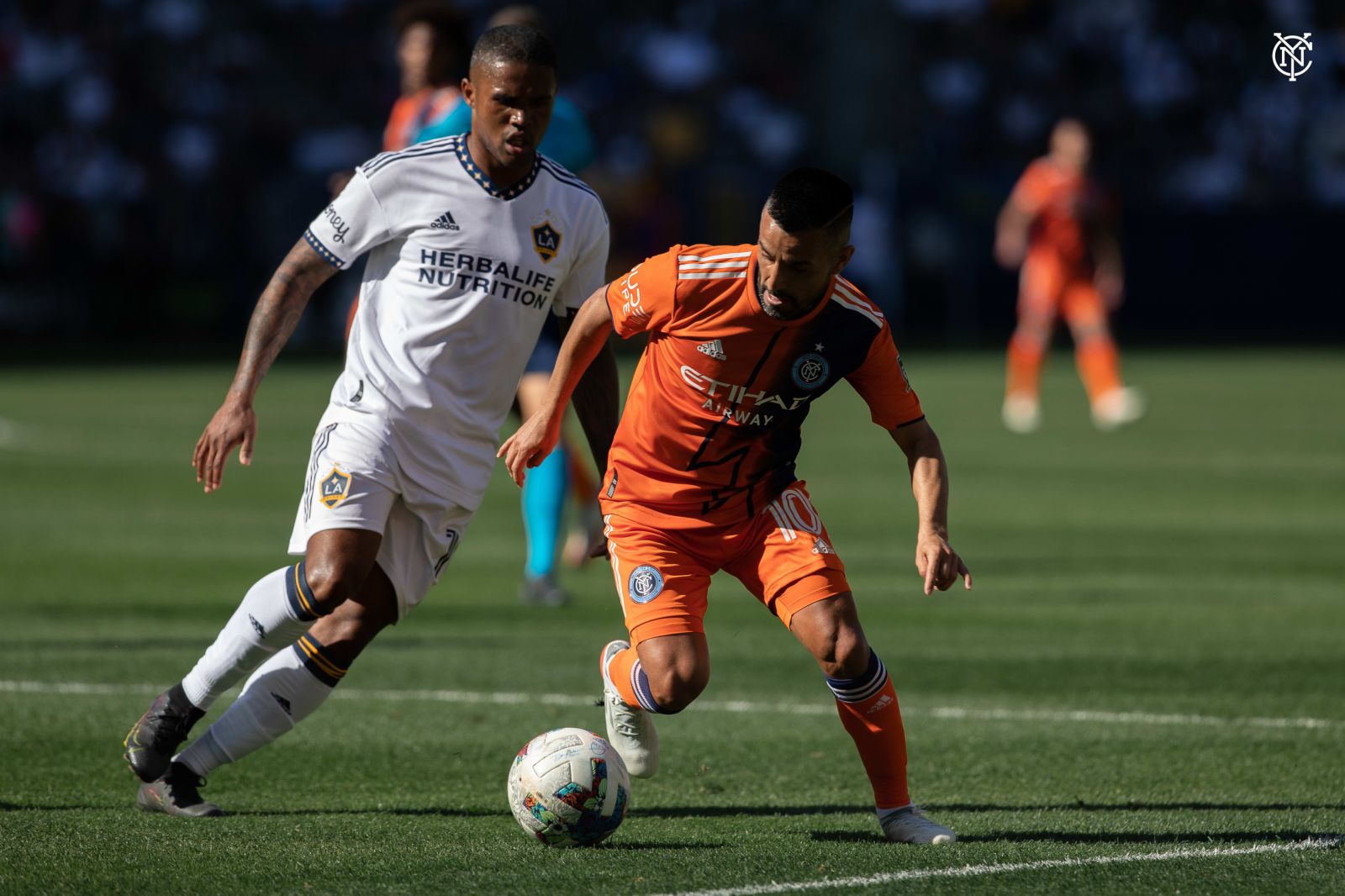 Photo courtesy of NYCFC.com
Article by Scott Churchson, The Sports Den & The Sports Insiders
Host and Journalist Spanglish World Networks, Spanglish Sports World
New York. - On a night in L.A. Where expectations and excitement ran high at the start of the 2022 season, the New York City Football Club struggled to have their offense gel as they fell to the home Los Angeles Galaxy 1-0. The team, which impressed to start CONCACAF with a 2-0 and 4-0 win over Santos managed only one shot attempt on goal early on and was unable to hold possession throughout; testing goalkeep Sean Johnson repeatedly until a goal in the 90th minute by the team's 2021 leading goal scorer Chicharitto gave the Galaxy the only score of the match. New York had a chance to tie in the 93rd minute but the shot by Heber went wide.

Per coach Ronny Deila, "It was difficult to move the ball as quick as we wanted. Overall the performance was good but we need to be more accurate with the ball to open things up even more. In the end we were disappointed.''

Tati Castellanos, last year's Golden Boot winner had two shots for the match, but neither on net as New York's road struggles continue. Last season The Gents in Blue had the worst road record of the 7 East playoff teams with just 17 points in 17 matches. Coming up next week the schedule will remain on the road as the team travels north of the border to take on the Vancouver Whitecaps on March 5; a team they haven't matched up with since 2019.

2) NYCFC sported their new orange road jerseys this season; their latest road jersey addition after opting for the darker blue road jerseys the past two seasons.
3) New York City FC's offense may have challenges this season. While Tati Castellanos and his 19 goals are back, the team's second and third highest scoring leads in Jesus Medina and Ismael Tajouri-Shradi and their combined 16 goals are no longer with the club.
4) Javier Chicharitto Hernandez's 17 goals last year was good for 3rd overall in MLS. However those goals came in over 21 matches which was the best goals to match ratio of any player with at least 20 matches last season.

6) NYCFC has had good success against the Vancouver Whitecaps, having gone 3-1-1 in their history but haven't faced each other since August 2019 on the road in BC Place; ending in a 3-1 victory against the White Caps.
7) The team's CONCACAF Champions League schedule will continue with a “home” match on March 8th in Hartford Connecticut against Comunicaciones FC out of Guatemala City. Yankee Stadium, which as a pitch  was not approved for Champions League play will finally be used for the first home match of any sort on March 12th when the team plays against Montreal.
FIFA Concacaf MLS Soccer NYCFC LA Galaxy NYCFC.com Scott Churchson The Sports Den Spanglish Sports World Spanglish World Networks Zingo TV