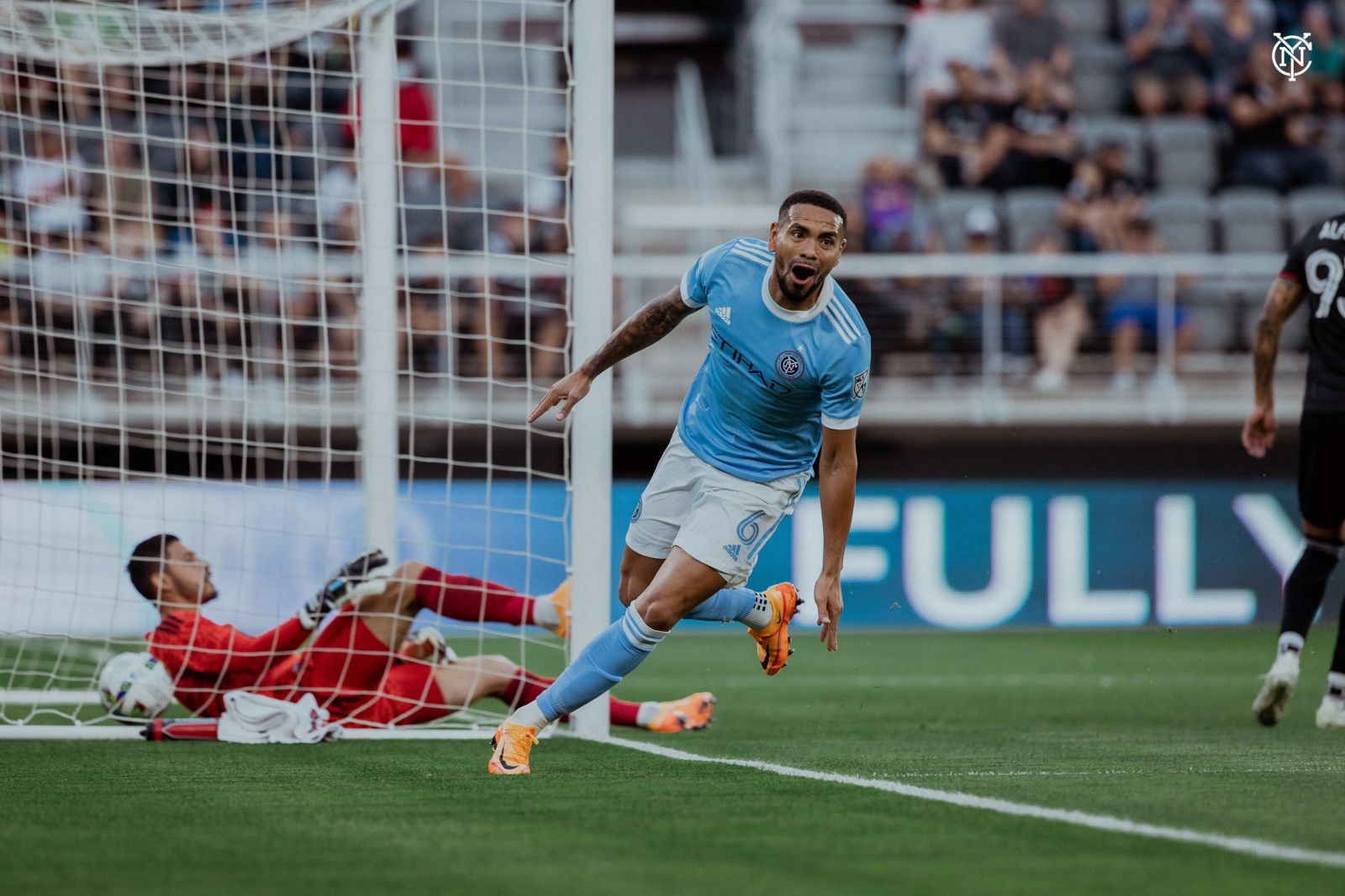 Photo courtesy of NYCFC.com
Article by Scott Churchson, The Sports Den & The Sports Insiders
Host and Journalist Spanglish World Networks, Spanglish Sports World
New York. - NYCFC picked up its 5th win in 6th matches and it’s 4th straight MLS shutout as their 2-0 win over DC United pushed them back into 2nd place in the East. On a night where it took all of 6 minutes to secure the game winner via an Alexander Callens header near the left post the Gents In Blue the first half was anything but simple. A pair of shots off the post by DC United plus multiple scoring chances nearly cost NYCFC the lead. However a much needed goal from Golden Boot winner Taty Castellanos goal via penalty kick during added time in the first half took the wind out of the United sails and seemingly deflated the home crowd as well.
Operating with a 5 man back for the second half NYCFC was able to prevent the United pair of Ola Kamara and new acquisition Taxi Fountas (both leading the team with 5 goals each) from managing a shot on goal, and New York’s defense once again held an opponent to just only no goals, but zero shots on goal for the match as well. With the win not only does the team launch itself into a season high 2nd place in the East (behind the Philadelphia Union who’ve played one more match) but the team ties it’s own record with 4 straight MLS shutouts and a chance to break that on Sunday as they take on the struggling Chicago Fire at Citi Field.
5 Notes:
1)    Drawing a Yellow Card during the second half means leading goal scorer Taty Castellanos will be out of commission Sunday due to accumulation. Head coach Ronny Deila did not come off concerned when discuss it, stating there’s a full squad capable of taking his place. Additional Yellow Cards were given out to Santiago Rodriguez and Gedion Zelalam.
2)    Perhaps more impressive during the 4 match shutout streak is the fact that during the run they’ve only allowed 6 shots on goal during the run.
3)    The Chicago Fire are currently sitting at 2-5-5 on the season which is not only worst in the East, but worst in MLS as a whole. The world struggle has defined the Fire for nearly a decade, as they’ve only had one winning season since the 2013 season and missed the playoffs every year after 2012.
4)    On the other side, NYCFC has been able to turn it’s season around quickly. After starting the season 1-3-1 and near the bottom of the East, they’ve picked up 16 out of a possible 18 points, outscoring their opponents 18-4 during the run. Part of that was attributed I believe as many do to the stress of not only the start of the MLS season but advancing to the Semi-Finals in the Concacaf Champions League simultaneously. The US Open shouldn’t pose as much of an issue as the league is badly with the spread out schedule. NYCFC will be playing next week on the 25th against the New England Revolution in the round of 16 at Belaon Stadium in Queens, home to NYCFC II.
5) Lastly, goalie Sean Johnson’s 6 clean sheets on the season is tied for best in the league alongside Orlando City’s Pedro Gallese.
FIFA Concacaf MLS Soccer NYCFC DC United NYCFC.com Scott Churchson The Sports Den Spanglish Sports World Spanglish World Networks Zingo TV