NYCFC's Junior Club Loses in Shootout in First Ever Match 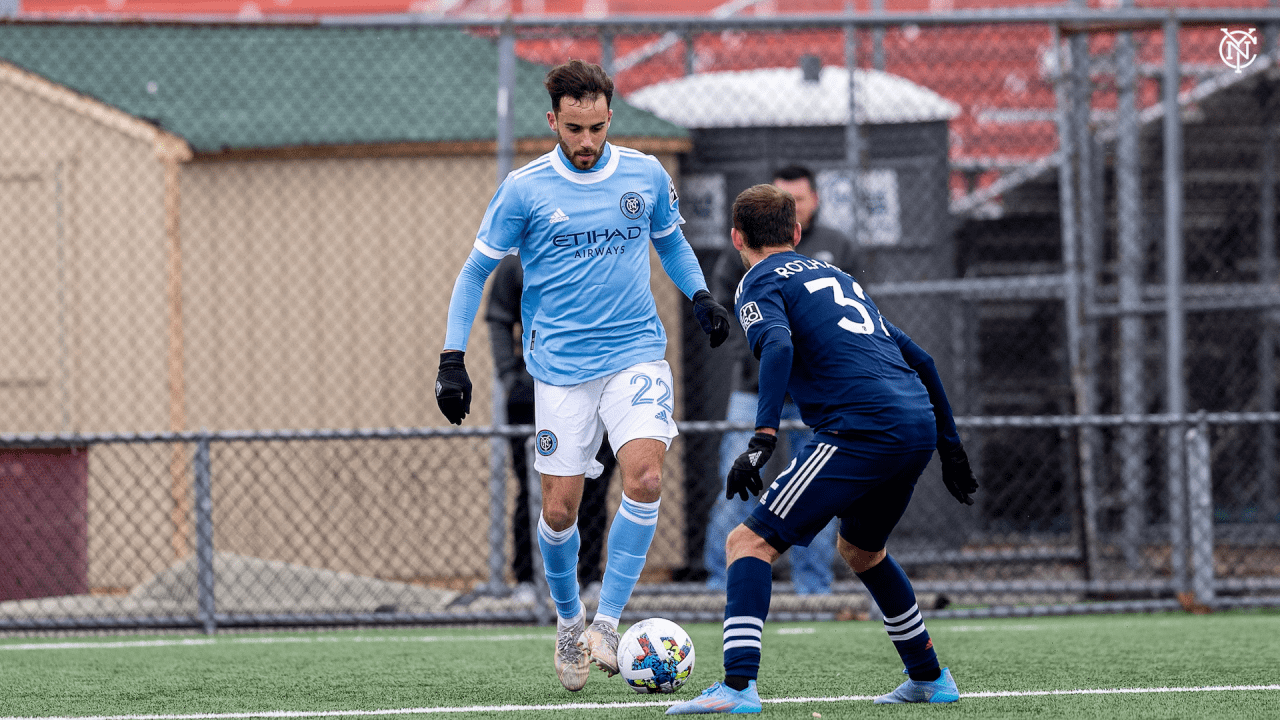 Photo courtesy of NYCFC.com
Article by Scott Churchson, The Sports Den & The Sports Insiders
Host and Journalist Spanglish World Networks, Spanglish Sports World
New York. - For NYCFC's new developmental team, aptly named NYCFC II yesterday's first ever match ended in disappointment as they fell at home to the New England Revolution II team in a shootout 2-2 (4-3). Playing in their new facility at St. John University in Queens on a cold March day, the team had nearly every opportunity to pull out a win. Falling behind 1-0 6 minutes in the team rebounded quickly with a goal by John Denis on 3 minutes later on a nifty pass by new addition Kevin O'Toole. Toward the end of the 1st half NYCFC II took the lead for the first time in the match almost 30 minutes later as defender Chris Gloster took a shot inside the left post.

The second half offered plenty of chances, but little to show for it. As a result, Midfielder Damien Rivera scored his second goal of the match at the 70th minute knotting the match at 2-2 and ultimately forcing an overtime shootout. With a chance to lock down the shootout win two shots rang off the post and Revs-II pulled out a win from the jaws of defeat. In the end, NYCFC-II earns one point for going into the shootout, but missed out on a second point for a shootout win.

Next up for the team is a trip to Orlando taking on their developmental team on April 3. Orlando City B won their first match 2-0.
5 Notes:

1) By all accounts, NYCFC-II controlled the match with a better possession, shots, shots on goal, pass accuracy & corner kicks. Head coach Matt Pilkington admitted that the point their received still felt like a loss but acknowledged there were a great many things they could take from this match.
2) There was some aggravation from the players over the pitch used at Belson Stadium. Being a turf field the ball was prone to bounce more than normal. Additionally the wind certainly didn't help the situation so time will tell how the team will adapt.

3) The NYCFC-II regular season will be 24 games between now and September 18th. 21 teams in MLS Next, 10 in the East, 11 in the West with no more than four matches being played in the opposing conference (NYCFC-II will be playing a solely Eastern Conference schedule). While at this point all the details regarding the playoffs have not been finalized, it is confirmed that the top four teams from both conferences move on.
4) The team stadium Belson Stadium is home to the St. John's Red Storm soccer teams. Located in Queens, New York, it holds 2,168 fans. This stadium is not foreign to NYCFC, as it has been used as the venue for NYCFC academy since 2016.
5) MLS Next is expected to grow next season, adding 8 additional teams affiliated with MLS teams, including the New York Red Bulls & Atlanta, Charlotte & both LA teams. Additionally independent teams are expected to be added next season as well. Right now only the Rochester club is an independent team.
FIFA Concacaf MLS Soccer NYCFC NYCFC II New England Revolution II NYCFC.com Scott Churchson The Sports Den Spanglish Sports World Spanglish World Networks Zingo TV