Skinny Gasol made his brief debut 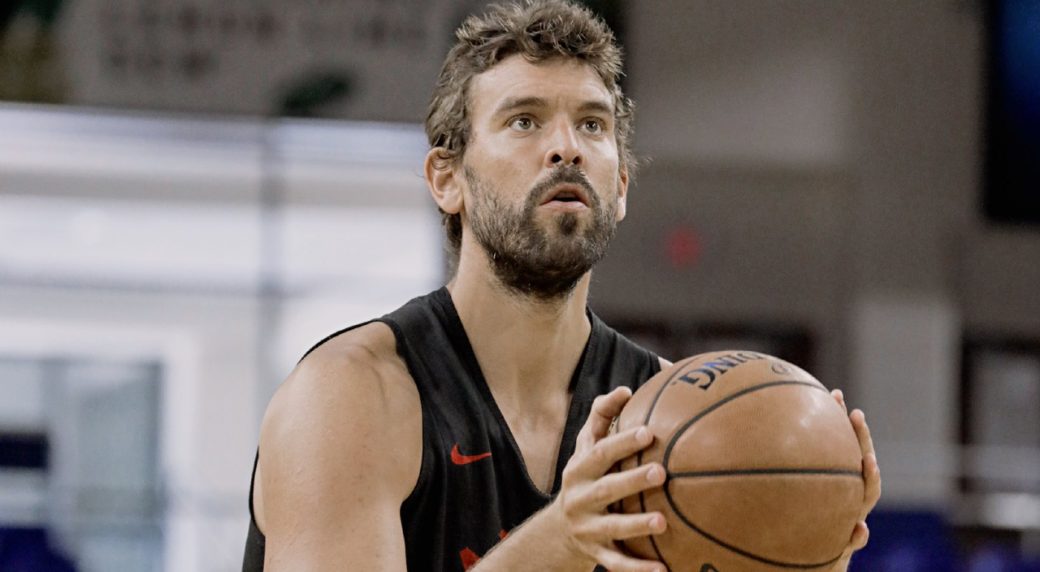 Photo courtesy of Toronto Raptors Advanced Media
By Harley Kock
BarnBurner Network
TORONTO. - Toronto Raptors 110 - 104 Portland TrailBlazers
It was only 10 minutes, but it was enough to make this Raptor fan smile.
Almost half a year since he touched the hardwood, the slimmed-down Marc Gasol's start was a highlight of the Raptors narrow victory. We were back to the normal 12 minute quarters for the second of Toronto’s three “scrimmage” games.
Gasol had three points and four rebounds, but it was a solid return for the 35-year-old who'd missed 28 games with a hamstring injury before the COVID-19 Pandemic shut down the NBA.
Gasol and Serge Ibaka both started as part of Head Coach Nick Nurse's "jumbo" lineup against a big Portland frontcourt with Yusuf Nurkic and Hassan Whiteside.
Much like the game versus Houston defence was an issue early on.
But it wasn’t the biggest as Fred VanVleet was lost less than a quarter into the game. He suffered what the team called a "banged" left knee, but was able to leave the court under his own power and make it to the locker-room.
Portland led for most of a first quarter that ended in a 25-25 tie.
Ibaka hit a three late in the second quarter to give the Raptors a one-point lead, but the Trailblazers went on a mini run to close the half up 54-49.
The Raptors dug in on the defensive end in the second half. Kyle Lowry and Terence Davis hit back-to-back three-pointers late in the third quarter, putting the Raptors up 80-67. Toronto had a commanding 87-75 lead going to the fourth.
Portland had a brief late-game scoring fest but ultimately it just made the final score of 110-104 a bit closer.
Ibaka once again found his shooting stroke, knocking down 3 for 5 from behind the arc. We saw some classic Ibaka getting into a short scuffle with Nurkic.
Patrick McCaw sat out his second straight game with an undisclosed injury.
Nurse following the first scrimmage said it's tough to call a play or direct his players as his voice carries so well in the quiet fanless arena. Officials actually had to warn both teams coaching staffs on Sunday as their criticisms aimed at referees could also be clearly heard. Something to look out for in the future.
Serge Ibaka scored 19 points, while Pascal Siakam added 18 to lead the Raptors. Matt Thomas had 16 points, well Lowry and Davis dropped 13 points each.
It is important to note that Damian Lillard did not play for Portland.
All in all the defending champs have looked really good, especially in their defensive adjustments through the first two games.
Next Up, Toronto’s final scrimmage is Tuesday, July 28th at 3:00pm Eastern against the Phoenix Suns.
NBA NBAPA Toronto Raptors MLSE Toronto Raptors Advanced Media Portland Trail Blazers Marc Gasol BarnBurner Network Harley Kock