The CFL home stretch and who will be under centre? 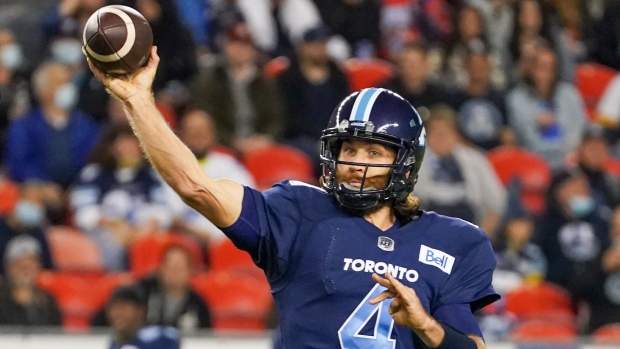 Photo Courtesy of The Canadian Press
Article by Frank Stanisci
Host and Journalist of Candid Frank Live CFL Talk, Spanglish Sports World, Spanglish World Networks
TORONTO. - The CFL Season is officially in the home stretch, starting this past week Winnipeg punched their ticket to the playoffs, the first team to do so. Saturday afternoon’s Montreal in Toronto has 1st place alone implications complete with a ticket to the playoffs joining the Blue Bombers. Teams on the other end of the scale are making or will make changes. Edmonton has traded Trevor Harris to Montreal and traded for Nick Arbuckle from the Argos.
Quarterbacks may become available like Michael Reilly and Bo Levi Mitchell. Hard to believe as it may be both have not played up to their contracts. Trade deadline or off season the fact is both are and have to be available for both financial and performance reasons. Teams with the playoffs on the horizon will be making hard decisions on the most important decision, who is under centre?
In the West Saskatchewan and Calgary look to be on the horizon of making the playoffs. Cody Fajardo after trending as a top QB has tripped a little thanks to the Stamps. Even in winning Bo Levi has not impressed and some may suggest that the Stamps have won in spite of Mitchell.
BC has a former MOP in Reilly, yet his team and stats do not reflect that history of this tough as nails QB. In ’19, The offensive line was the issue, this year is up for discussion. Quarterback Vernon Adams in Montreal is hurt. Montreal has taken out insurance in the person of Trevor Harris.
In Toronto McLeod-Bethel Thompson has been given the reins with some rumblings that Antonio Pipkin the better tandem fit than Arbuckle was, could be a starter at some point. Hamilton has the 2 healthy starters in Masoli and Evans the best combo of QBs in the CFL going in. Injuries have brought that into question. In Ottawa the departure of GM Desjardins means his successor will answer first above all other questions, who is your starting QB that your Coach Paul LaPolice can call on?
In the West Reilly, Mitchell, Fajardo and Arbuckle noted are no where near as successful, impactful, effective and hard to believe, healthy as Zack Collaros. Zach has taken a very good team and turned them into a juggernaut. While credit for the success of the Bombers can be equally shared between the defense and offenses, and returerns, the kicking has been suspect. Enter one of the best kickers of the past decade Sergio Castillo. Just what the rest of the CFL playoff contenders need to hear, the Blue Bombers have solved their kicking issues to go with the best offense and defense in the CFL.
In the Canadian Football League, first overall or in the Division, best Quarterback, offense, defense or special teams guarantees nothing. That the fans have learned joyfully and sadly all too often. Let’s set up the dance partners and play some Canadian Football. The Grey Cup is one solitary month away.
Is it December yet?
CFLCFLPA MLSE Toronto Argonauts Montreal Alouettes Michael "Pinball" Clemons The Canadian Press Candid Frank Stanisci CFL Talk Spanglish World Network Spanglish Sports World Zingo TV