Time To Panic? NYCFC Now at 3 Losses in First 5 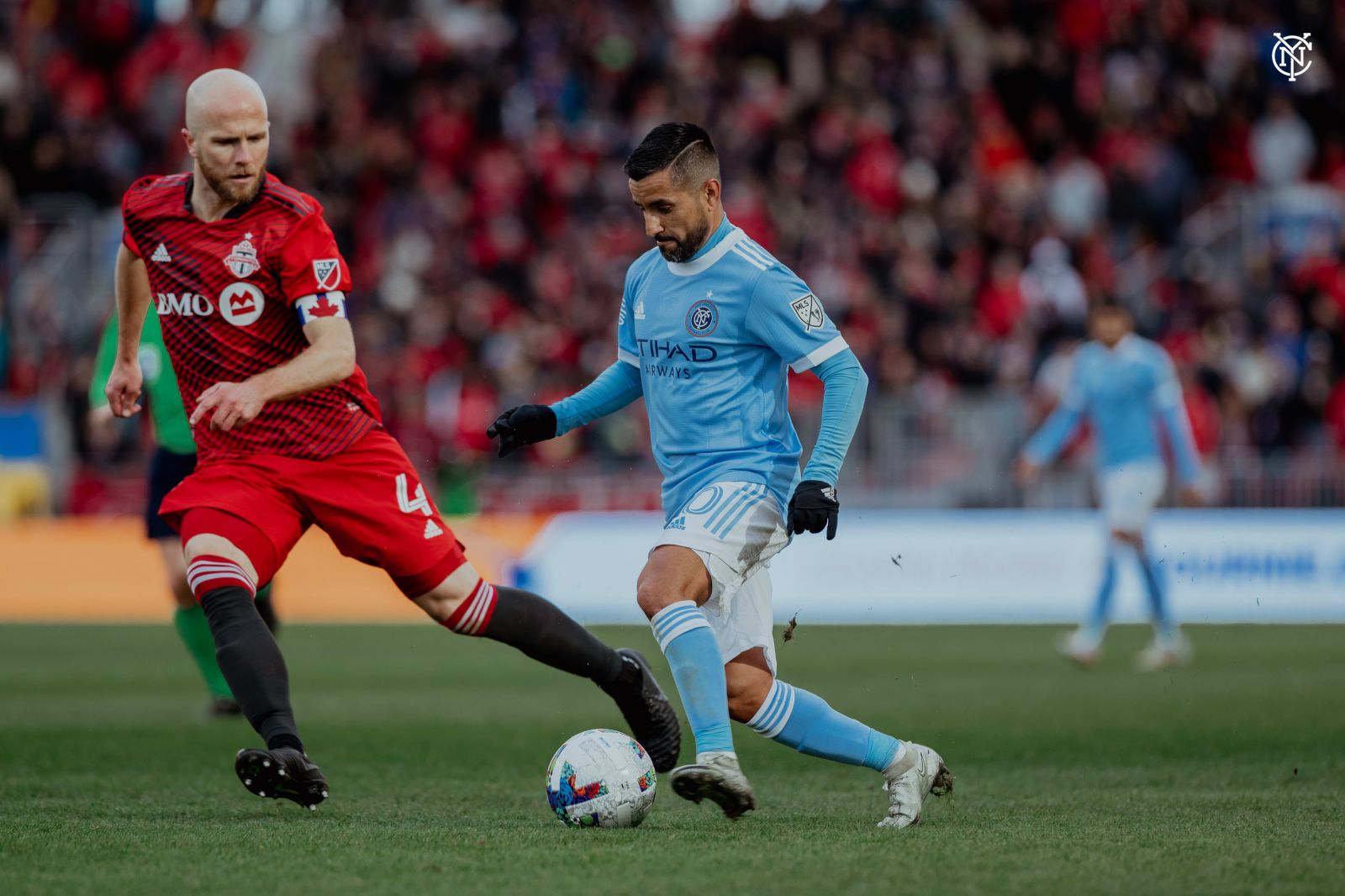 Photo courtesy of NYCFC.com
Article by Scott Churchson, The Sports Den & The Sports Insiders
Host and Journalist Spanglish World Networks, Spanglish Sports World
TORONTO. - NYCFC came out of the international break with a disappointing loss on the road against Toronto FC, dropping their first match north of the border by a score of 2-1. On a day where once again they lead in most if not all categories including shots, shots on target and possession the team fell behind 2-0 by the end of the first half. First it was Jesus Jimenez in the 31st minute slipping by three New York before a shot to the right side broke the tie. Twelve minutes later things went from difficult to worse when Thiago Martins inadvertently headed the ball into his own net making it 2-0 to close out the first half. Late in the added time in the second half Heber scored his first goal since 2020 to little celebration.

What must be brought up is a questionable (at best) no call on a trip of Talles Magno in the 5th minute of the match. After being tripped by Toronto's Kosi Thompson in the penalty box the initial call was a penalty kick and a yellow card, but after VAR the call was reversed. NYCFC protested but to no avail. In the post game press conference, head coach Ronny Deila had no answer. “This is not the first time it’s happening. I’m starting to get used to this now because it’s happening five six times every year. I talked to the referee, and he admitted a mistake. He doesn’t do the mistake that I don’t know who’s the mistake but he has to get the picture.”
New York gets little rest as the semi-finals for CONCACAF starts on Wednesday as they travel to Lumin Field for the first match against the Seattle Sounders.
4 Notes
1) Between the international break and the CONCACAF Champions League, this match is the only MLS match for NYCFC is just under a month. Last match was 3/19, next MLS match will be on 4/17 against Real Salt Lake.

2) With regards to the no call trip of Talles Magno in the 8th minute the PRO (Professional Referee's Association) issued a statement stating the VAR issue was incorrectly handled due to an angle clearly showing the infraction was both not examined by VAR nor shown to referee Drew Fisher. Few can blame Fisher for overturning his own call based on what he was shown, but that error cost New York a golden chance to take a 1-0 lead early.

3) With this loss NYCFC has just 5 points in it's first 5 matches and sits at 11th place in the East. Only the start of the 2020 season has been worse for the Gents In Blue.

4) Yesterday's match came only a few minutes away from the team being shut out 4 times in it's first 5 matches. Aside from the 4 goal onslaught they put on Montreal in the home opener, the team has just 1 goal in it's other 4 matches. No goals as yet for Golden Boot winner Taty Castellanos; who went through a similar drought last season before pouring it on after breaking the streak.
FIFA Concacaf MLS Soccer NYCFC Toronto FC NYCFC.com Scott Churchson The Sports Den Spanglish Sports World Spanglish World Networks Zingo TV