Training Camps and Preseason Is Here 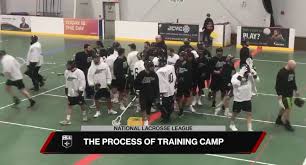 Photo Courtesy of NLL.com
Article by Gary Groob
Columnist and Co-Host on Spanglish Sports World and Spanglish World Networks
TORONTO. - For lacrosse fans, hearing there was going to be a season in 2021-2022 was music to their ears.  Seeing players tweet, text, and actually arrive at training camp was a sight for their sore eyes.  But to actually attend an NLL game (albeit pre-season) had fans in absolute euphoria this past weekend.
Over the past few weeks teams had opened their training camps.  With a majority of players from Canada, and more specifically Ontario, a lot of camps were held in the Greater Toronto Area (GTA), in three different locations.
Where the camps were held:
A majority of teams went to the Toronto Rock Athletic Centre (TRAC) in Oakville, as it has two regulation floors, as well as state of the art training equipment in the facility.  Brampton's Memorial Arena was also used, as well as the Iroquois Lacrosse Arena (ILA) in Hagersville, Ontario, for the teams to get started, and get their reps in.
The coaching staffs where looking at two years worth of draft picks, players who arrived via trades or free agent signings, as well as veterans who remained on their team.  Drills, skills, and bonding was the order of the day throughout the camps.
Memorial Arena and Iroquois Lacrosse Arena:
In Brampton, Ontario, at the Memorial Arena, Fort Worth's expansion team got together for the first time in their history.  Dan Teat, an assistant coach with Panther City, and career Brampton Excelsior (Hall of Fame player and coach) started training camp there, soon joined by head coach Tracey Kelusky, for the majority of the Canadian players.  Just prior to last weekend, the team flew south to Fort Worth for the first time in their history, to prepare for their opening weekend in December.
The New York Riptide also used Memorial Arena to open their camp, but soon moved to the Iroquois Lacrosse Arena.  This team wasn't an expansion team, but had so much movement of players from their inaugural year, that they needed to be introduced to one another as well.  General Manager Jim Veltman, and Coach Dan Ladouceur had built a very strong team through trades, signings, and two drafts, and were very anxious to put the team through its paces.
TRAC:
As always, the Toronto Rock's facility was buzzing with anticipation and excitement as teams like Buffalo, Philadelphia, Saskatchewan, and of course Toronto were using it to get ready for pre-season action.
Pre-season:
This past weekend, for the first time since March of 2020, there were NLL games (even if they were only pre-season).  Most teams were trying new ideas, having players play in different positions, and using more youth than veterans, getting ready for the regular season.
Saskatchewan played Toronto, as well as Philadelphia scrimmaging with Buffalo on Saturday evening at TRAC.  The New York Riptide played the Albany FireWolves at the ILA on Saturday evening as well.  Sunday morning had Buffalo taking on Saskatchewan in yet another pre-season matchup at TRAC, and the Halifax Thunderbirds faced the Georgia Swarm at the ILA in Hagersville, Ontario.
The games kept scores, but they really were irrelevant.  Getting in game shape, playing top talent, and shaking off some of the rust from the last year and a half of inactivity, was more of the idea than whether they won or lost.  Pre-season action will continue for the next two weeks, while teams trim their rosters in time for opening weekend on December 3rd.
The buzz was in the air at TRAC on Saturday, and only is going to get louder as the season approaches.   Fans have waited twenty long months for lacrosse that matters, and the season is only a couple of weeks away now.  The teams will be ready, the fans will definitely be ready...this will be an epic re-start...you won't want to miss it!