Copa America final will proof to be Peru's biggest challenge 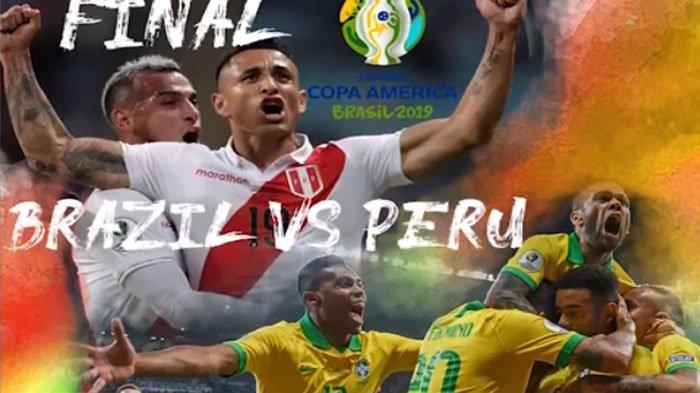 Photo courtesy of pontianak.tribunnews.com
By Eduardo Harari
TORONTO. - Tomorrow at Maracanã Stadium, Peru will face Brazil for the Copa America Title. Peru arrives to this final after a 44-year absence while Brazil has one goal in mind a is to restore its supremacy and give their fans the coveted victory that has evaded them for the last 12 years of International competition at home.
In the last 44 international matches between this two, Brazil has won 32 times while Peru only has 4 and the remainder have been draws. Let's not count out Peru's current track record as they did not only defeated Uruguay in their way to the finals but also the two-time defending champions Chile in a true showing of great football.
Let’s now analyze the Copa America 2019 final match between Brazil and Peru and find out their game strategies and team formations they are likely to opt for this game.
Brazil:
Brazil defeated the Albiceleste in the semis in a frustrating and, at times, a foul oriented match decided by a goal in each half from Gabriel Jesus and Roberto Firmino. Argentina continues to complain about the non-use of the VAR and that the referring was favoring the hosts but at the end the numbers of the game favor Brazil in all areas and the result is in the record books.
In this particular tournament no one can say that Brazil is a one player team as the the absence of Neymar (out due to injury) has been a blessing for the team. This team looks more confident in their play with a one touch punch in their attack. Defensively, Brazil has been flawless so far in the tournament, with the back four and goalkeeper Allison doing splendidly. The only point of concern and inconsistency is in their midfield were holding on to the ball and distribution remains doubtful.
Strategically, Tite will continue with his winning team combination and a 4-3-3 team formation. More freedom has to be provided to Gabriel Jesus and Coutinho moving upfront as they have been the most dangerous amongst all Brazilian attackers. Arthur and Casemiro have to quickly release the ball or else the threat of getting dispossessed remain. Everton is likely to keep his place in the starting eleven.
Predicted Starting Lineups
Brazil (4-3-3): Allison Becker; Alex Sandro, Thiago Silva, Miranda, Dani Alves (C); Philippe Coutinho, Casemiro, Arthur Melo; Gabriel Jesus, Roberto Firmino, Everton.
Peru:
Many have said that if you were to judge Peru in this Cup play, they should have not advanced to the knockout round as they were disastrous only scoring once during the group round. The sudden change defensively was outstanding against Uruguay taking them to the penalty stage. Once again against Chile, they played a very defensive game which forced mistakes in Chile's back end and thus the result.
Peru's keeper Pedro Gallese is a symbol of his side's unpredictable nature. A pitiful figure in the 5-0 drubbing against Brazil, he was immense when it mattered most. He was outstanding against both Uruguay and Chile. Edison Flores and Paolo Guerrero have also been in good form in the last two matches.
Strategically, Coach Garcia prefers to field a 4-2-3-1 formation and, in all probability,, he will stick to it in the finals too. The double pivot in front of the defensive line, Yoshimar Yotun and Renato Tapia had a great match against Chile with the former scoring a goal as well. The Coach will expect to see a similar performance from them in the finals because it will be essential for them to break and disrupt attacks down the middle from the Brazilians. They have to stay close to the defensive quartet and provide no space to their opponents.
Predicted Starting Lineups
Peru (4-2-3-1): Pedro Gallese; Miguel Trauco, Luis Abram, Zambrano, Advincula; Yoshimar Yotun, Renato Tapia; Edison Flores, Cristian Cueva, Andra Carrillo; Paolo Guerrero (C).
Predicted score line of Copa America Final: Brazil 1 – Peru 0
Copa America Conmebol Brazil 2019 Brazil Peru Maracanã Stadium Uruguay Chile Argentina Gabriel Jesus Roberto Firmino VAR Coutinho Arthur Casemiro Everton Allison Becker; Alex Sandro Thiago Silva Miranda Dani Alves Tite Pedro Gallese; Miguel Trauco Luis Abram Zambrano Advincula; Yoshimar Yotun Renato Tapia; Edison Flores Cristian Cueva Andra Carrillo; Paolo Guerrero pontianak.tribunnews.com Spanglish Sports World Frecuencia Deportiva Eduardo Harari La Portada Canada