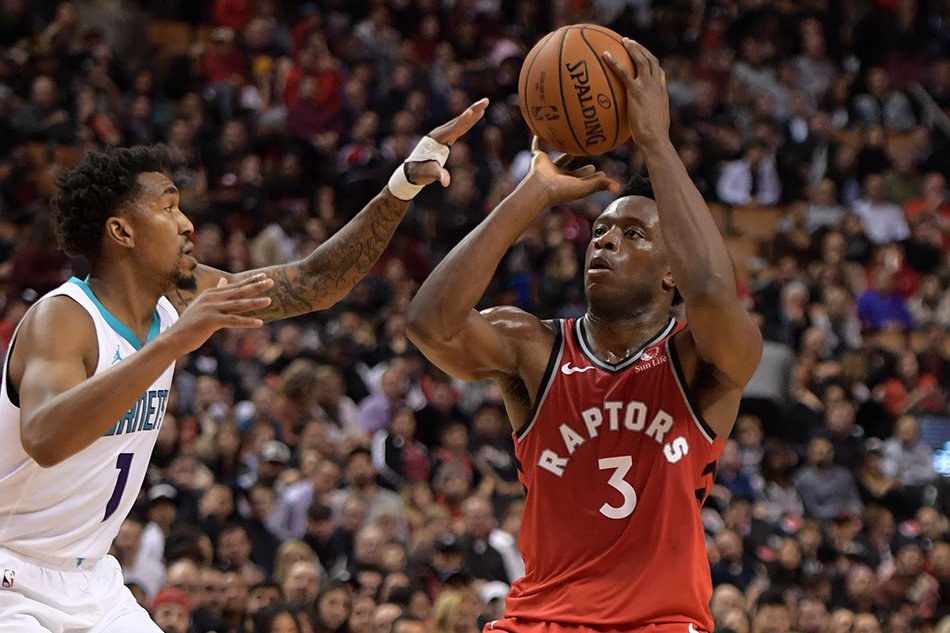 Photo courtesy of Dan Hamilton, USA TODAY Sports, Reuters
By Eduardo Harari
TORONTO. – Scotiabank Arena was just the remedy the doctor ordered for the Raptors after a long and treacherous road trip across all the possible time zones. They finished the trip on a 3 – 2 winning note on the books but with the losses of Kyle Lowry (Finger Surgery) and Serge Ibaka (ankle strain).
Toronto is continuing to show that even in the absence of key players their bench can produce and handle the task as OG Anunoby contributed 24 points, 5 rebounds and 2 assists on a record-breaking night for the franchise of 40 assists on 50 field goals. The Raptors went on to trash the Hornets by a score of 132 – 96.
“He jump-started us there in the second half,” coach Nick Nurse said. “I don’t know how many he made … four threes and a couple of them were dribble to the left late in the clock. Those were big. I think that helped us gain a lot of momentum.”
The Raptors started the evening on a fast pace of 18 - 10 in the first 7 minutes of the game. But they turned over the ball four times late in the quarter allowing the Hornets to get with in one point as the quarter finished with a score of 26 – 25. The scoring being provided by Pascal Siakam, Norman Powell and Fred Van Vleet.
Nick Nurse went with a lineup of Chris Boucher, Matt Thomas, Hollis-Jefferson, Davis and Siakam for a large majority of the second quarter while VanVleet took a breather. VanVleet did not shoot well in the first half – just 1-for-6 – yet the stretch was a stark reminder that they don’t have another point guard to call on with Lowry injured.
Photo courtesy of Cameron Browne, NBAE via Getty Images
Hollis-Jefferson provided a spark off the bench with 13 points in the second quarter. A Williams three-pointer gave Charlotte a brief three-point lead, but an 18-6 run put the Raptors up by nine and they took a 60-56 lead into halftime.
Rondae, who signed a one-year deal with Toronto after 4 years with the Brooklyn Nets, had really impressed coach Nick Nurse in the minutes he was given during the Western road trip, playing in 4 / 5 games. In the final three games out West, he played more than 25 minutes in each outing, averaging 11 points, eight rebounds and two steals while also providing defense on some big wing players.
“I’m probably most impressed with his feet, to be honest. For his size and strength, he really can move his feet. We can put him on even smaller guys because he can really slide side to side and he’s a relentless worker,” Nurse said of Hollis-Jefferson. “I’m impressed with his offence. He’s been cutting in there, finding the right timing, he comes in, blasts in hard from what we call our dunker spot, and he does it with force and moves it around and makes a good share of layups, draws a good share of free throws.”
The Raptors outscored the Hornets 32-18 in a dominant third quarter, and the game tipped completely into a one-sided affair.
Anunoby exploded for 16 points in that quarter – including four three-pointers. He had tied his career high of 22 points before the fourth quarter had even arrived.
Anunoby did have to leave the game momentarily in the third quarter after he was elbowed in the eye by Charlotte’s Nik Batum, but he was all right.
Photo courtesy of NBA.com
“I wish they’d catch the guy who does it once in a while,” Nurse said after Batum wasn’t called for a foul, the same with Leonard in the Clippers game. “That’s two games he’s been hit in the head and nobody sees anything.”
"We were just joking about that at the end of the bench towards the end of the game," Hollis-Jefferson. "’Hey, dude you are going to have to wear the Bane mask (from "The Dark Knight Rises" Batman movie) pretty soon just to keep people out your eyes.’ He laughed.
"It’s definitely scary to see but it’s a part of the game."
Anunoby said after the game that the eye felt “a bit better.”
Anunoby was 4-for-7 from 3-point range Monday and has shown a marked improvement from deep in recent weeks.
“I work on it every day, so each day I get more comfortable,” he said.
With a hefty lead late in the fourth quarter, the Raps called down the bench and brought everyone in. That included Malcolm Miller (five points) and rookies Oshae Brissett (no points) and Dewan Hernandez (two points), who made his NBA debut.
Photo courtesy of Frank Gunn, CP
Seven Raptors (9-4) scored in double digits while also producing a franchise-high 40 assists. Pascal Siakam had 20 points, while Norm Powell had 17, Terence Davis chipped in with 16, Rondae Hollis-Jefferson added 15, and Fred VanVleet and Chris Boucher finished with 11 apiece.
“Even though there were some long possessions early in the game I thought we kept staying with things and ended up getting good shots, even late in the shot clock,” Nurse said. “That’s awesome to see. So many guys with such big numbers and it was start to finish, really.”
Toronto rebounding issues came to an end this evening as the they dominated the boards 53 – 37.
"Tonight we really did a good job and chased them down," Nurse said, "but it was on our board as a focus: ‘Win the rebound battle and we win the game’ was kind of what we were saying going into tonight, so they did a good job of taking that from the board to the floor."
Monday marked the beginning of a lengthy home stretch for Toronto — seven of nine games at Scotiabank Arena. The Raptors host the Orlando Magic on Wednesday.