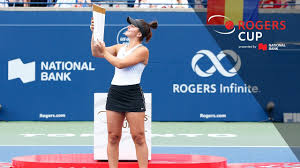 Photo courtesy of Rogers Cup.com
By Eduardo Harari
Toronto. - It was an unconventional way to win but Bianca Andreescu with this win return the Rogers Cup to Canada after a 50-year waiting period.
Faye Urban beat Vicki Berner in the 1969 final, when the tournament was still played on clay courts and called the Canadian Open.
Andreescu went up 3-1 in the first set of final when Serena Williams called for a medical timeout. It took no more than a minute before the umpire announced that Williams was abandoning the match, giving Bianca her second WTA Premier title of the season.
“I’m speechless right now. I’m the first Canadian who got to the finals and has won this tournament since 1969,” Andreescu commented to the Rogers Cup fans after being presented with the Rogers Cup trophy in an on-court ceremony. “This has been a dream come true, really.
“This week has not been easy. I’ve had many tough matches.”
This was Andreescu’s first tournament since a right-shoulder injury sidelined her in May.
“What I’ve been through the past two months has not been easy,” said Andreescu. “I kept telling myself ‘never give up.’ I’m trying to look at my injury not as a setback but more of a challenge. I tried to embrace it as much as I can.” 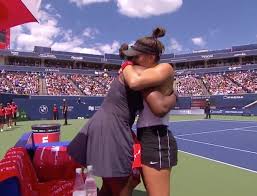 After the chair umpire announced Williams’s retirement the former world No. 1 started to cry on her bench. Andreescu went over to comfort her, hugging her and telling Williams how much she admires the 23-time Grand Slam winner.
“I’m not a crier, but, thank you guys,” said Williams as she choked back tears after accepting the second-place cheque. “I’m sorry I couldn’t do it today. I tried but I just couldn’t do it.
“But thanks to Jehovah for letting me even come out here today. Bianca, you’re a great sportswoman.”
Rogers Cup WTA Aviva Center Tennis Canada Bianca Andreescu Rogers Cup.com Spanglish Sports World Barn Burner Network KBuena Radio TV Eduardo Harari La Portada Canada

Thoughts on the Shield

This week in the WNBA

Could it be that Rogers Communications is trying to make the Blue Jays attractive for a bidder?