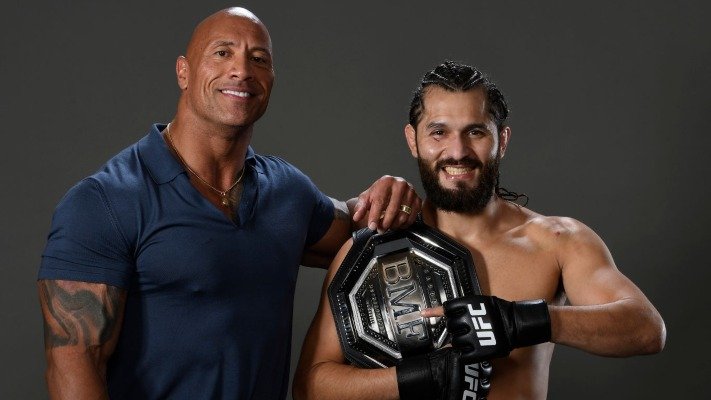 Photo courtesy of Mike Roach, Zuffa LLC, Getty Images
By Giancarlo Aulino – BarnBurner.ca
TORONTO. - Jorge Masvidal put his excellent striking on full display Saturday night, forcing the doctor to intervene and stop the fight before the fourth round due to a cut around Nate Diaz’s right eye, to capture the BMF title.
UFC 244 provided plenty of exciting moments and memorable knockouts, but it was the main event that provided a whirlwind of emotions for those in attendance at Madison Square Garden and watching at home.
To kick things off, Dwayne “The Rock” Johnson made his way to his seat next to UFC President Dana White, but it was no ordinary entrance; The Rock came out with the BMF title over his shoulder and his WWE theme song playing in the background. Not matter the venue, The Great One surely knows how to make an entrance.
Photo courtesy of BT Sport WWE
Masvidal caught Diaz with a powerful elbow and followed that up with a kick that dropped him early in the first round, leaving him with blood pouring down the right side of his face. Diaz was able to recover and get some offense in at the end of the round, but Masvidal was the clear winner of the round based on damage and significant strikes.
Diaz was able to string a few combinations together and scrambles on the ground, but Masvidal was still in control of the fight. With the exception of the scramble and submission attempt, Masvidal had great takedown defense, which made it difficult for Nate to take the fight to the ground and use his jiu-jitsu.
As the fourth round was about to begin, the doctor checked Diaz’s eye and asked him if he was good to continue, to which Diaz responded that he was good to go however, the doctor made a judgement call and decided to call the fight and give Masvidal the win by doctor’s stoppage.
Fans in attendance were upset and voiced their displeasure and many fans took to Twitter to dispute the stoppage especially with who was fighting and what was at stake.
Following the bout, both Masvidal and Diaz made it known that they intend to run it back and have a rematch for the BMF title. It’ll be interesting to see if the BMF title was just a one off or if the UFC intend on having featured as an official championship, where they organize a welterweight bout between Masvidal and the opponent or catchweight bout depending on the weight class of the opponent.