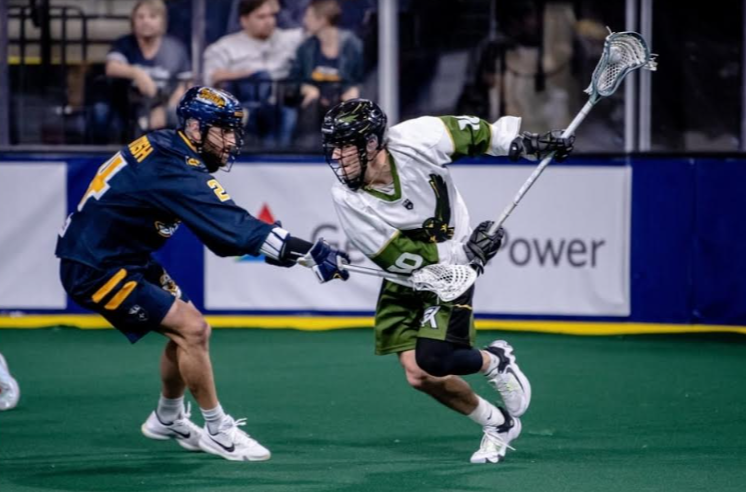 TORONTO. - After a few forgettable seasons as an expansion team, the Knighthawks definitely looked to improve in the off season.  We knew the deals made this past summer were game changers, but no one (other than the team itself) thought it would be this much, this soon.

Rochester made a splash at the expansion draft this past summer.  Trading for Forward Connor Fields, as well as goalie Riley Hutchcraft.   The entry draft saw Austin Hasen drafted in the first round and added another goal scorer to the mix.

Fields has made an immediate impact scoring 16 goals, adding 13 helpers, in just four games played.  Hasen has been a force in the lineup as well.  Although Hutchcraft hasn't played yet, there is stability with the knowledge a veteran is ready, if need be.

GM Dan Carey on his moves:

“With Connor Fields, he’s starting to become a proven player and he scored over 30 goals this past year for Buffalo,” commented Carey when asked what Fields will add to the offensive unit in Rochester. “We believe he can do the same thing here in Rochester, and he might even have more of an opportunity and take on a little bit more of an increased role with us when it comes to the amount of opportunities he gets on the power-play and in certain situations.”

“Riley Hutchcraft is a young goalie that we believe could be a guy that really helps us win games,” began Carey when asked how Hutchcraft can help better the goaltending tandem in Rochester. “We have a good staff of goaltending, or a good group of goaltenders here in Rochester, that are young and eager to get better.”

Joining Fields, and Hasen are a group that was close, but needed those extra pieces to get over the hump.   Thomas Hoggarth, Ryan Smith, Holden Cattoni, Curtis Knight, and Turner Evans rounded out a very potent offense.  To this point of the season, they have put up 142 points in 5 games.

Having a group that is both tough, and full of finesse is a rare bonus.  The leader is Captain Paul Dawson, with Mitch Ogilvie, Tyler Halls, Tyler Biles, Matthew Bennett, Jordan Stouros, Ethan Schott, and Dan Coates.   The transition game is led by Matt Gilray, Brad Gillies, and Ryland Rees.

Rylan Hartley has been nothing short of spectacular.  He has a goals against average of 9.60, and a save percentage of 80%. Hartley has faced 246 shots, making 198 saves in his first five games this year, also adding two assists. If he can stay healthy, the Knighthawks can make a lot of noise in the very competitive East Division.

This past summer, the Peterborough Lakers of Major Series Lacrosse won their fourth straight Mann Cup (the Stanley Cup of Lacrosse).  On this Knighthawks squad there are nine Lakers, as well as Head Coach Mike Hasen.  The bond created in Peterborough, as well as the winning tradition has rubbed off on this young Knighthawks team.

About a third of the way through the season, and the Knighthawks are the only undefeated team in the league.   Rochester has beaten Georgia, Albany, Toronto, Panther City, and New York to this point, with another huge test this weekend.  The biggest rivalry for the Knighthawks has always been the Buffalo Bandits.  The Bandits are coming to the Blue Cross Arena as powerful as ever, having only lost one game this year themselves.

The buzz that has been created between the two cities hasn't been this strong since the old Knighthawks squad (now the Halifax Thunderbirds) were winning three championships in a row, 2012-2014.  This young, exciting squad is starting to get the town excited again with marked improvements in attendance game by game.

Although there is a long way to go in the season, this team will certainly be in the thick of the playoff race.  With the excellent coaching of Mike Hasen, a proven winner in every level, the sky is the limit for this team.

Regardless of where they finish, they will be an exciting team to watch throughout the season.