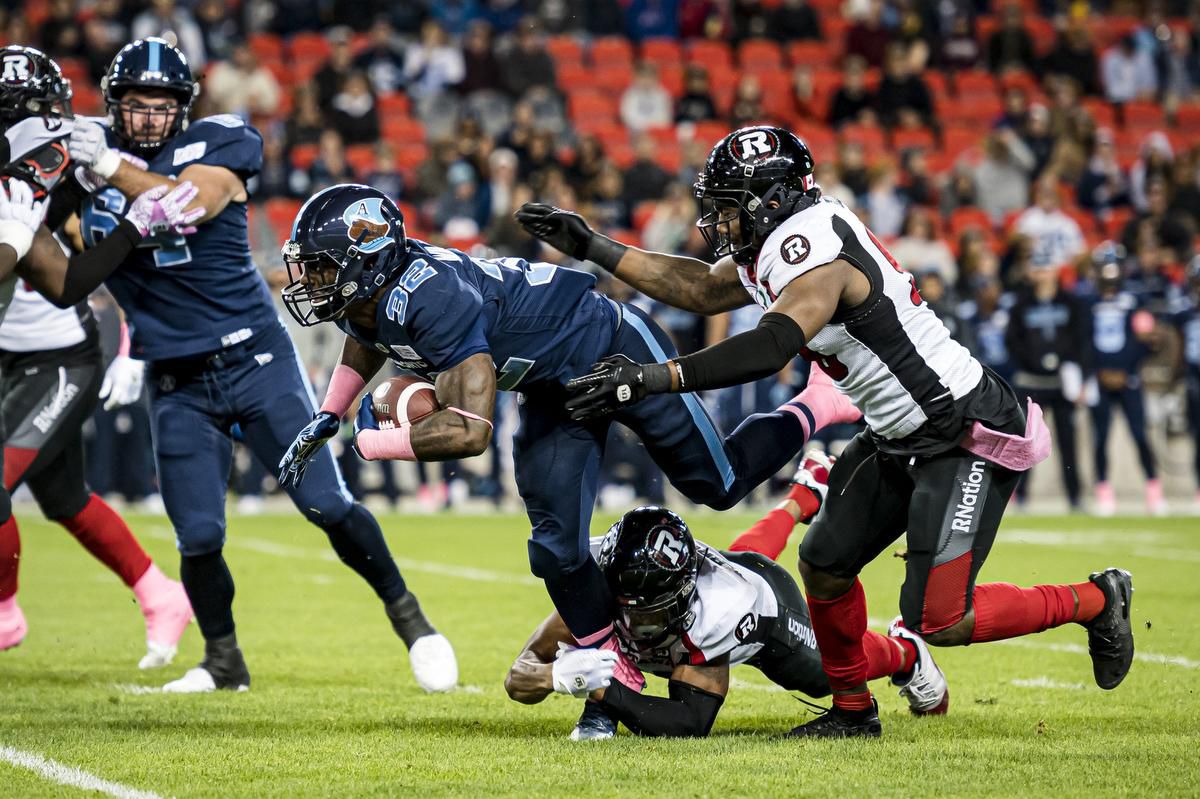 Photo courtesy of Christopher Katsarov, The Canadian Press
By Jarred Bapty - BarnBurner.ca
TORONTO. - This game was barely a contest.
The Toronto Argonauts used three different quarterbacks underway to their massive victory in their last home game of the season.
McLeod Bethel-Thompson played the first half and was replaced by Dakota Prukop to begin the second. Michael O’Connor saw the last snap of the third quarter and remained in the pocket to complete the game.
Armanti Edwards was the favorite receiver, targeted 10 times and caught six for a season high 126 yards and a touchdown.
Bethel-Thompson started the afternoon with confidence and completed a 33-yard pass to Armanti Edwards for the first touchdown of the game. Toronto continued to dominate possession but, a defensive breakdown allowed Will Arndt to find Dominique Rhymes in the endzone in just four plays to tie the game late in the 1sthalf.
Toronto immediately with a touchdown thrown to Chandler Worthy to reclaim the lead 15-8, which was the score at halftime.
Prukop took over and completed his first career CFL touchdown pass on his first throw to Rodney Smith. The 13-yarder made it 21-8 but, Prukop couldn’t keep the souvenir because Smith threw the ball into the crowd.
After another Redblacks two-and-out, Prukop found AJ Oullette for his first career CFL touchdown catch to keep cranking up the score.
O’Connor was subbed in for Prukop and completed his first career CFL touchdown pass on his first drive also to Rodney Smith but, he threw the ball away again!
So, no keepsakes for the rookie quarterbacks despite both their impressive outings.
Prukop went six for eight in the 3rd for 98 yards and two touchdowns, while O’Connor was five for nine in the 4th for 61 yards and a touchdown.
Bethel-Thompson just missed cracking 200 but still threw four more yards than Arndt. He closed the 1st half with 198 yards and two touchdowns.
Arndt hit 194 yards and a touchdown. Caleb Holley had five catches for 64 yards as the top receiver for Ottawa, while Rhymes had the lone touchdown catch. Kevin Brown was a defensive juggernaut for the Redblacks with 10 defensive tackles and one special teams tackle.
Toronto closes out the season against the Tiger-Cats in Hamilton while Ottawa heads home for a meeting with the Montreal Alouettes.
Toronto Argonauts Bill Manning Michael " Pinball" Clemons John Murphy Corey Chamblin McLeod Bethel-Thompson Dakota Prukop Michael O’Connor Armanti Edwards Will Arndt Dominique Rhymes Chandler Worthy Rodney Smith Ottawa Redblacks AJ Ouellette Caleb Holley Kevin Brown Hamilton Tiger-Cats Montreal Alouettes Christopher Katsarov The Canadian Press Jerred Bapty BarnBurner.ca Spanglish Sports World KBuena Radio.TV La Portada Canada