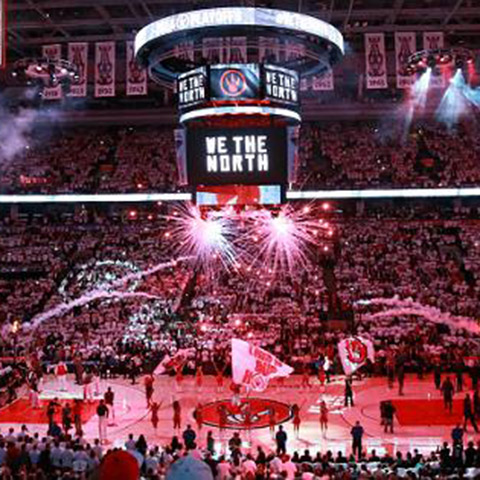 Photo courtesy of Raptors Advanced Media
By Harley Kock – BarnBurner.ca
TORONTO. - The Raptors are 14-4, 2nd in the Eastern Conference and 3rd in the NBA overall
Following the greatest season in Raptors history, when they hoisted their first ever Championship banner, most experts penciled Toronto in for a tough season. Finals MVP Kawhi Leonard leaving for the L.A. Clippers being the main reason.
Fans pointed toward a 17-5 record well Leonard sat with load management, but 13 of those wins were against non-playoff teams.
Head Coach Nick Nurse said before the season, “Listen, I approach it from this standpoint: we got some guys that will need to expand roles that they wouldn’t have had to, but I think we got guys that are capable of that.”
And oh boy have they shown it. 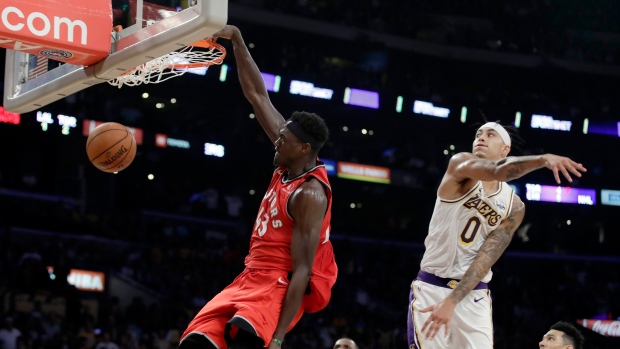 Photo courtesy of Marcio Jose Sanchez, AP
Pascal Siakam was given a max contract before the Raptors tipped off the 2019-20 season. So far, the 4th year pro has more than earned it. Playing in all 18 games he’s gone for 25.1 points per game, 14th in the entire league. Last years most improved player has made another huge jump, improving his three-point shooting to a respectable 38% and leading Toronto with 8.6 rebounds per game.
All this while being the Raptors go-to scorer, earning some praise from his coach, "He seems to cut all my timelines in about half or, you know, more than that sometimes … But I keep saying this, when he went to work on it, he went to work on it," remarked Nurse.
Fred VanVleet was inserted into the starting lineup alongside Kyle Lowry to start the season and has fit right in. The 25-year-old leads the NBA in minutes at 37.8 per game. He has been outstanding defensively averaging 2 steals, good for 5th in the NBA. When Lowry went down most expected the team to take a step back. But VanVleet was already running a lot of the offence even with Lowry, and is now 11th in the NBA, averaging 7.3 assists per game. Since Lowry’s injury VanVleet has been in all star form, averaging 21.2 points over a 10-game span.
But its a team game and the Raptors defence is why they hold the third best record in the association. Toronto is number one at clamping down on opposing offences, holding teams to just 41%. This had helped them to fourth in giving up points, at 103.8 per game. 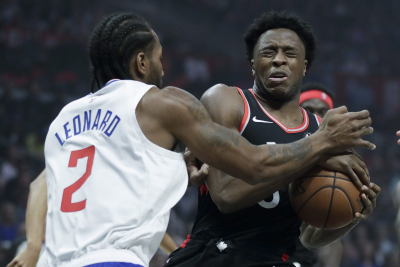 Archive Photo courtesy of AP
O.G. Anunoby hasn’t had the most eye-popping numbers so far. In 17 games he’s proven to be an efficient defensive stopper with great lateral quickness and an ability to guard multiple positions. In his third season just 11.3 points per game but on an efficient 53% for the floor with 48% from beyond the three-point line.
Some new players in the back of the rotation and a defence first philosophy was ingrained on them during training camp. “I keep telling (them), Show me you’re going to play defence, show me you’re going to play hard, show me you understand our coverages, show me. And then, whatever you do at the other end, you’re going to get opportunities just because of who you’re on the floor with.” Nurse exclaimed before the season began.
Then he backed it up running just a 8-man rotation during their opening night win against the New Orleans Pelicans. Over the next few games he gave spot minutes to everyone on the bench, just trying to find who was going to give him that defensive effort.
It took until game number 9 to find his depth defensive stopper. Some of it was necessity, with both Kyle Lowry and Serge Ibaka getting injured in the first game of a 5-game road trip.
But… Rondae Hollis-Jefferson took that opportunity to heart. A DNP or inactive for 7 of the Raptors first 8 games was given a shot against the L.A. Lakers. He took to guarding LeBron James and helped hold him to 5 of 15 from the field on-route to a Toronto win.
The next night it was Kawhi Leonard and the Clippers. Despite the loss, Hollis-Jefferson frustrated Leonard in a 2 of 11 shooting night.
He backed that up by making it three in a row against 3 straight all-stars. Next up was a small guard showing his versatility, helping hold Damian Lillard to 2 for 12 in a Raptors victory.
Since then Hollis-Jefferson has been a regular off the bench, averaging 22.4 minutes per game and is trusted in guarding the opposing team's best offensive scorers, “He’s an energy-type guy,” Nurse said. “I’m most impressed with his feet, of all things. Like, he’s strong and he plays hard, but he really can move his feet. He really can slide them side to side, beat guys to the spot, and he’ll work all day long out there.”
The west-coast road trip was a successful 3-2, even after losing the final game to the Mavericks.
Photo courtesy of Frank Gunn, CP
It’s what they have done since, that has been outstanding. 6 wins in a row and now 8-2 without Lowry and Ibaka. These include setting an NBA record for the most wins at home against division opponents with a remarkable 33 in a row. You must go back 4 years to find the last loss, a 2-point defeat to Carmelo Anthony and the New York Knicks on November 10th, 2015.
The Raptors depth will need to be a factor going forward.
Terrance Davis has quietly fit into the NBA. A willingness to defend hard and a great first step help him break down the opposing defence. His minutes have been up-and-down, but he has shown potential to be a good pro player, "I think we might be seeing more than we expected to see," said Nurse of his rookie guard.
Norman Powell just had a career high 33 points and has done well as a starter. Guys like Chris Boucher and Matt Thomas have put together some solid games in relief, giving Nurse a lot of future options.
All-in-all its been an excellent start to the season for the defending champion Toronto Raptors.