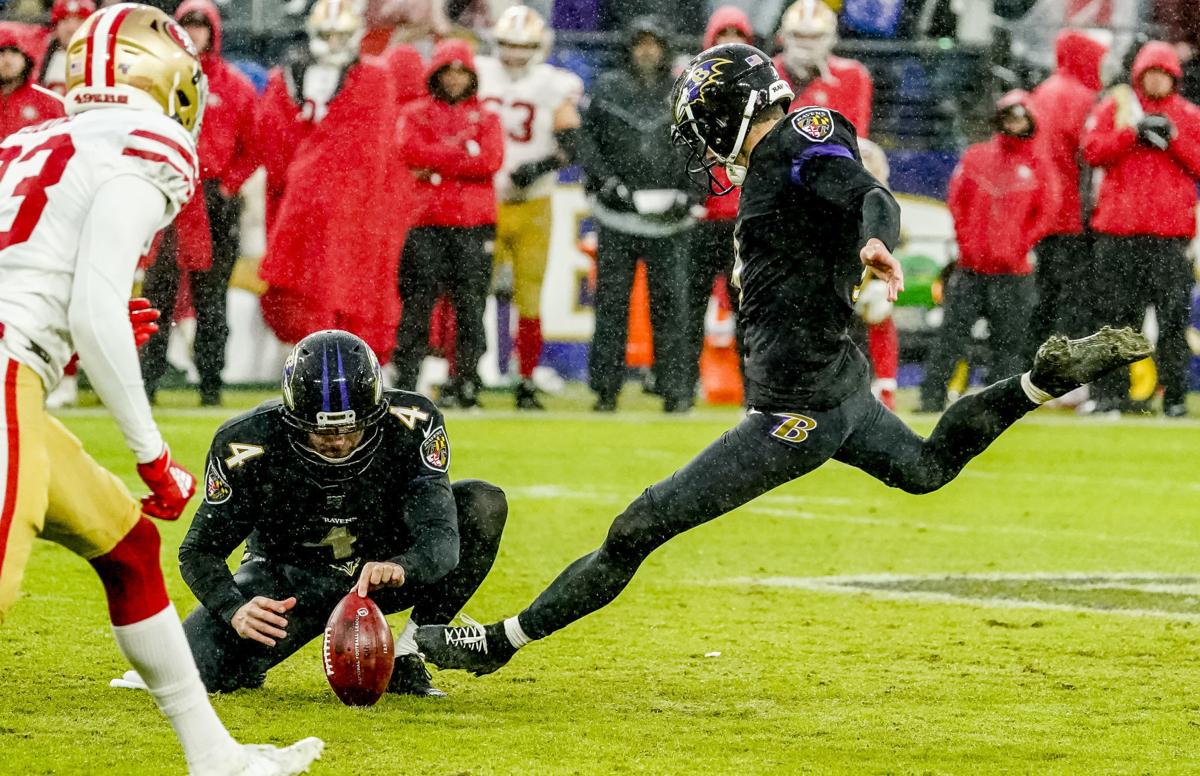 Photo courtesy of Scott Serio, Cecil Whig
By Jake Carter – BarnBurner.ca
TORONTO. -  This week saw some wild weather and some great matchups with playoff races growing in excitement each week. It also had some unexpected results with the underdogs coming out on top.
San Francisco vs. Baltimore
A potential Super Bowl preview lived up to the expectations in Baltimore. On a wet, windy afternoon, the 49ers top-ranked defence couldn’t stop Lamar Jackson and the Ravens. The quarterback ran for 101 yards, and Justin Tucker kicked a 49-yard game winning field goal as time expired. The Ravens defeated the 49ers 20-17 for their franchise-record eighth straight win.
Tampa Bay vs. Jacksonville
Nick Foles’ first three drives for the Jaguars ended in costly turnovers that the Buccaneers turned into touchdowns. Jacksonville head coach Doug Marrone benched Foles at halftime, electing to go with Gardner Minshew. He threw a touchdown, but a late interception stopped the comeback in a 28-11 Buccaneers win.
Philadelphia vs. Miami
This game had a somewhat surprising result and featured one of the wildest touchdowns of the season. Down 13-7 in the second quarter, the Dolphins were at 4th and goal on the one-yard line. Instead of kicking a field goal, holder Matt Haack threw a touchdown to kicker Jason Sanders. The Dolphins won for their third time in their past five games, this time 37-31.
Washington vs. Carolina
Photo courtesy of Ricky Carioti, Washington Post
The Panthers got off to a 14-0 lead in the opening quarter, but the Redskins held them to just seven points the rest of the game. Washington running back Derrius Guice ran for 129 yards and two touchdowns as the Redskins collected their second straight win in a 29-21 victory.
New York Jets vs. Cincinnati
This matchup also saw a similar result with the underdog coming out on top. Bengals quarterback Andy Dalton made his return after being benched for the past three weeks and made his presence known. He threw for 243 yards and a touchdown, and Cincinnati won their first game of the season, 22-6.
Cleveland vs. Pittsburgh
The two teams kept things calm in their highly anticipated rematch after their last game that saw fighting and helmet swinging. In his second career NFL start, Steelers quarterback Devlin Hodges threw for 212 yards and a touchdown along with an interception. Pittsburgh scored 20 unanswered points in a 20-13 victory.
Green Bay vs. New York Giants
The Packers are no stranger to snowy conditions, even if it’s on the road. They proved it, as Aaron Rodgers threw for 243 yards and four touchdowns without an interception in a 31-13 win. The Packers handed the Giants their eighth straight loss, their worst losing streak since 2004.
Tennessee vs. Indianapolis
Photo courtesy of Darron Cummings, AP
Colts quarterback Jacoby Brissett was picked off three times, but that wasn’t the Colts’ only problem. Adam Vinatieri missed three field goals, with two being blocked, including a 63-yard score that was the go-ahead touchdown. That score propelled the Titans to a 31-17 win.
Los Angeles Rams vs. Arizona
Jared Goff and the Rams dominated the Cardinals, with Goff throwing for 424 yards and two touchdowns. L.A. put up 34 straight points before Arizona got on the board with a late touchdown. The Rams crushed the Cardinals 34-7 and improved to 7-5 on the season.
Los Angeles Chargers vs. Denver
This was another close game this week, as Brandon McManus kicked a tiebreaking 53-yard field goal as time expired to give the Broncos a 23-20 win. Rookie quarterback Drew Lock got the win in his Denver debut.
Kansas City vs. Oakland
Photo courtesy of Ed Zurga, AP
The Chiefs finished off the season sweep of the Raiders, and now hold a two-game lead in the AFC West after a dominating 40-9 win. Patrick Mahomes both threw and ran for a touchdown in the victory.
New England vs. Houston
The Patriots defence couldn’t stop Deshaun Watson, as he threw three touchdowns and caught one as well. Houston defeated New England 28-22. The Texans built a 21-3 lead until the Pats scored most of their points in the second half.