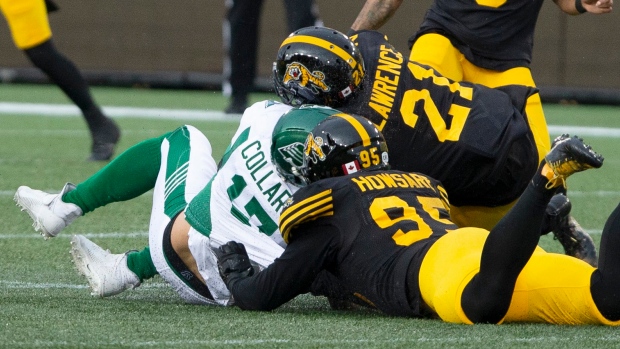 Photo courtesy of The Canadian Press
By Frank Stanisci – BarnBurner.ca
TORONTO. - The 2019 CFL Season held hope for all the teams, how it played out not so much.
At Quarterback the position by consensus, is the most impactful in the Canadian game. The starting nine did not survive the season with Zach Collaros leading the way. The official whistle to start the game did not stop wringing before Collaros was laid out by the Ticats Simoni Lawrence with an illegal head shot at Tim Horton’s Field.
The penalty leading to the suspension was vehemently contested by Lawrence immediately after the game in home locker room with a flurry of blue language. The CFL suspension was upheld and Simoni sat out the independent arbiter approved 2 games. This season had so many inconsistent calls by the Officials on the field that all is left is for the 3 down League to do is to try to find consistent location for the line not to be crossed by players.
One by one as the injured quarterbacks were replaced to varying degrees of success and failures.  The leader had to be Cody Fajardo of the Saskatchewan Roughriders who rode his team to first ahead of the defending Grey Cup Champs and the usual resident of first place in the West, the Calgary Stampeders.
Photo courtesy of Jeff McIntosh, CP
A close second was Vernon Adams in Montreal who moved under centre when Antonio Pipkin the projected #1 went down. Vernon had a little trouble with ball protection but made up for it with amazing comebacks one of historical precedent which came against the Winnipeg Blue Bombers.
Cody and Vernon are proof that if you don’t give up and keep trying until a Coach, Co-ordinator, and / or offense suits your talents is worth the wait for yourself the team, teammates and fans.
Nick Arbuckle in Calgary kept his team in reach of first in his first series of games until the Grey Cup MVP Bo Levi Mitchell was back from his early season injury.
Mike Reilly was the last QB to be forced out of the lineup by injury at the finish line. BC needed to run the table to have a hope to make the playoffs, but without Reilly the Lions fell short.
In Toronto the unproven #1 James Franklin was injured and McLeod Bethel-Thompson led the way statistically all season but could not find the wins needed to make a charge for the playoffs. MBT led the league with the most TDs a number that should have bettered his and team’s fate.
Photo courtesy of Scott Gardner, The Hamilton Spectator
The rest of the backups could not muster as much consistency as the before mentioned QBs.
Andrew Harris was exposed as a PED user and was suspended. The suspension may not be the limit of the punishment to be experienced by the Winnipegger.
We saw Special Team kick returns for TDs at a level and rate never seen before. Not just by individuals but teams with multiple threats. Riders Loucheiz Purifoy, Ticats Frankie Williams and Argos Chris Rainey led the way.
Defenses were physically and emotionally led by players like Ticats Simoni Lawrence, Riders Charleston Hughes, Bombers Willie Jefferson and Winston Rose, Als Henoc Muamba, and more.
Receivers like Ticats Brandon Banks, BCs Bryan Burham and Reggie Begleton made highlight reel plays. The running game showed flashes of brilliance by Williams Powell and Stanback and of course Andrew Harris.
The next 3 weeks will be worth the work, wait and anxiety. It is potato time, couch surfers. The rest join me for the LIVE action and reserve the whole seat but be prepared to not use it all.