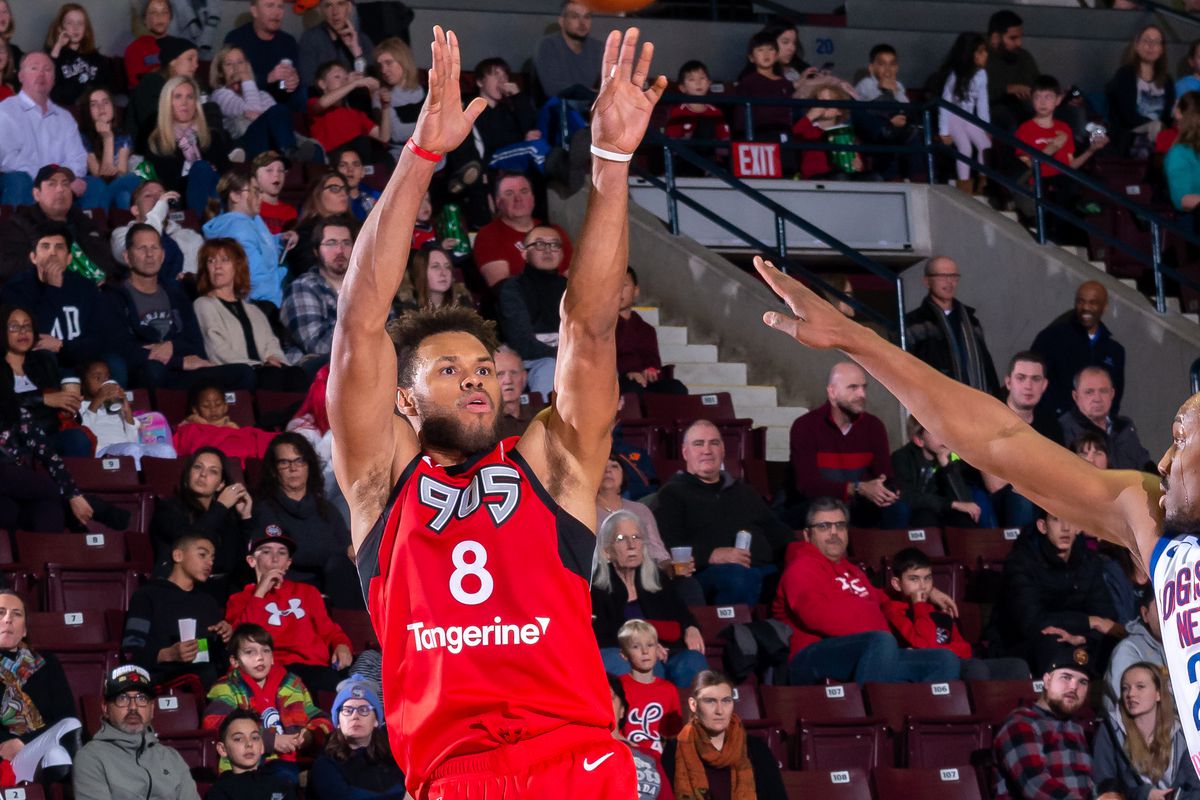 Photo courtesy of Christian Bonin, NBAE via Getty Images
By Noora Popal – BarnBurner.ca
TORONTO. - The Raptors 905 faced the Long Island Nets for the second time in the last week. This time at Scotiabank Arena in front of thousands of young fans. The game was one of the more exciting G-League games in recent times as the Raptors 905 battled their way through the 4th quarter and ultimately losing the match.
The Long Island Nets came to avenge their 111-112 loss from when they faced Raptors last week. The game went on consistently for the majority of its duration, with the Nets having the lead. Rodions Kurucs, 18 points, 9 rebounds, and 2 assists, and Henry Ellenson 20 points, 8 rebounds, and 3 assists, both lead their team in scoring. They were a major factor in the Nets’ win.
Tyler Ennis had a little bit of a shaky start, missing open shots, but he fed off the crowds' and his teammates’ energy and put up 17 points, 14 assists, and 5 rebounds. He came clutch towards the end of the match.
The first three quarters were tough for the 905. They struggled to make open shots, missed a lot of 3’s and were weak defensively. However, something came alive in the team towards the end of the game. They started making their shots and they tightened up their defense.
Justin Anderson, who was signed to the team just last week, was what the 905 needed to help them make the two comebacks in the 4th quarter. His energy was unmatched on the court as he engaged with the crowd and encouraged his teammates to not give up. His 40-point performance and leadership skills carried the team, especially in the 4th, where they made two mesmerizing comebacks.
It was one thrilling fourth quarter while the Raptors 905 climbed their way up from being down 10 points, not once, but twice. The quarter started with the Nets being up 90-80. Tyler Ennis made a shot putting them up to 82, and then Andreson made back-to-back shots, one of which was 3 pointer and 1. The score was cut to 88-95. This went on throughout the quarter. The Raptors kept trying to catch up while the nets kept pulling away from them.
The last-minute of the 4th was what felt like the longest one of the game. During the last minute, the Raptors manage to cut the lead once more. And with 0.5 seconds left on the clock, Anderson who had 38 points at the time, was fouled while attempting to shoot a 3. They were down 114-117, and it was in Justin’s hands to tie the game. The crowd was quiet. Everyone at the edge of their seats as he took the free-throws.
Anderson made the first two free-throws but ended up missing the last one, as it bounced off the rim. He ended the game with 40 points but disappointed, nonetheless. He said as the ball left his hands, he felt it go left.
Coach Jama Mahlalela was proud of his team’s ability to make such a drastic comeback but wishes they would play the entirety of the 4 quarters this way. This loss is one that the Raptors have a lot to learn from. As the team continues to adjust their style of play, they will face ups and downs in their journey this season. For their sake, it's more ups than downs. Either way, a team with this much potential has a lot of room to grow.
The Raptors 905 will be facing Fort Wayne Mad Ants on Saturday, December 7th, at 7 PM ET at Allen County War Memorial Coliseum. And again, the Long Island Nets on Monday, December 9th at 7 PM ET at NYCB LIVE’s Nassau Coliseum.
Raptors 905 Long Island Nets Christian Bonin NBAE Getty Images Noora Popal BarnBurner.ca KBuenaRadio.TV La Portada Canada