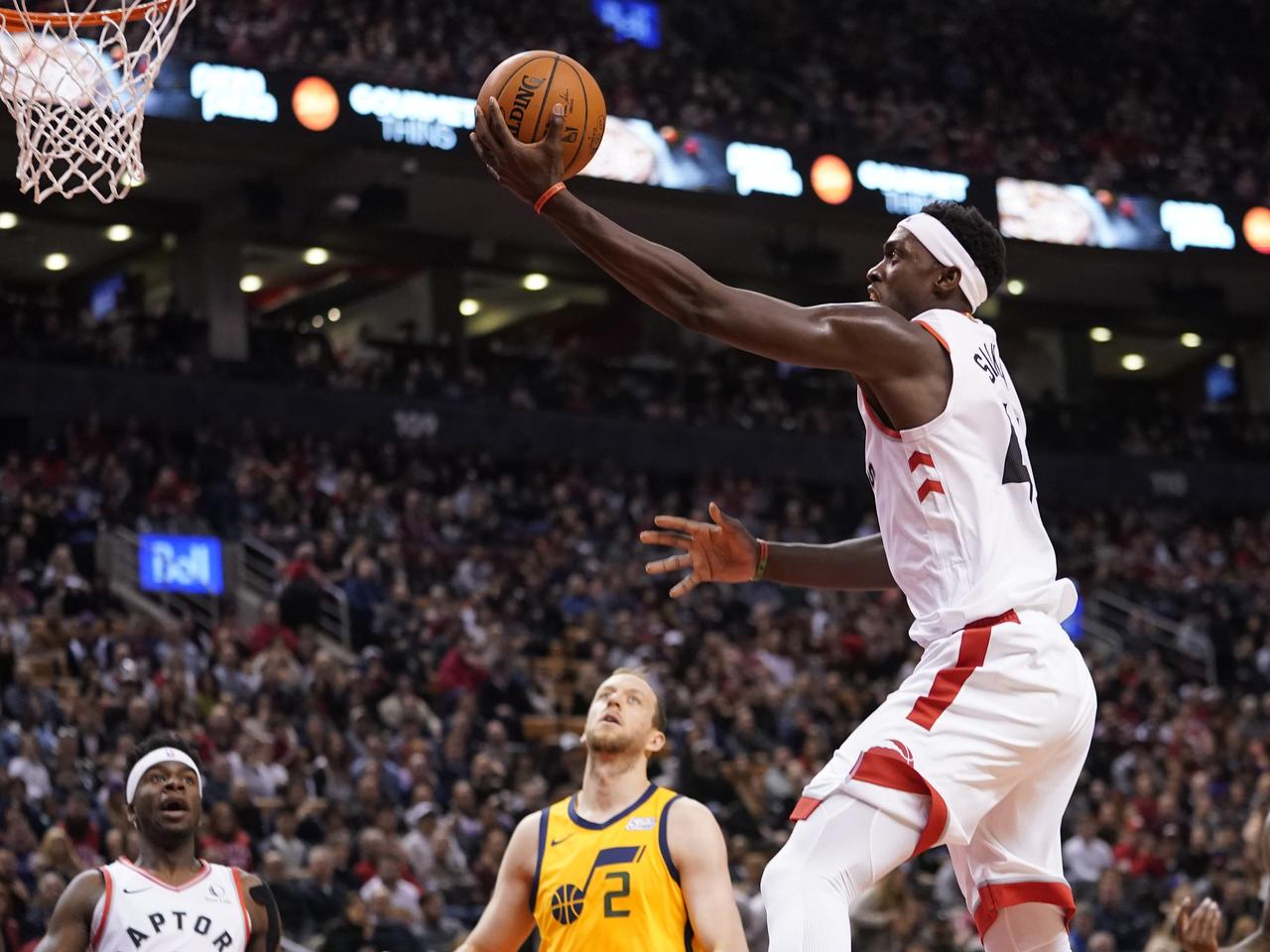 Photo courtesy of John E. Sokolowski, USA TODAY Sports
By Eduardo Harari
TORONTO. – This was a night full of personal and team milestones as the Utah Jazz battled against a Raptors team that was looking to extend their winning streak to 7 games and their home streak to 9.
The game looked as even match of strengths as the both teams responded to each other’s scoring for the first 5 minutes of the game and all the sudden the Raptors became a scoring and rebounding power never imaginable.
Ibaka got a standing ovation when he checked in late in the first quarter, in his first game after an ankle strain. The big man played 23 minutes.
By the end of the 1st quarter, Raptor Nation was erupting as their team took a 17-point lead on the Jazz of 37-20. Pascal Siakam once again took control of the offence with 19 points and 1 assist followed by Marc Gasol with 11 points, 4 rebounds 2 assists including three three-pointers and a dunk that he called "remarkable."
"We were awful," said Jazz coach Quin Snyder.
The 2nd quarter was a more defensive game were both teams slowed the tempo which gave the Raptors starters a breather and the new generation a chance to showcase their talents. The Raptors continued scoring in segments and managed by the end of the first half to increase the lead to an astonishing 40 points setting a new franchise record for points differential after the first half. 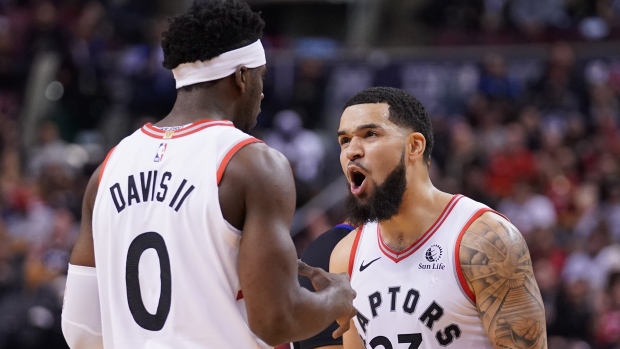 Photo courtesy of The Canadian Press
Fred Van Vleet and Terence Davis II lead the charge for the home team. The quarter was highlighted by a new evolution in the Raptor game strategy in which they came up with 9 assists that were distributed around the entire team.
Toronto held Utah to a 5-for-25 shooting in a 2nd quarter in which the Raptors were almost perfect. Hollis-Jefferson celebrated when his shot bounced four times on the rim before falling. Toronto shot 61 per cent in the quarter.
It was historic first half, as good a half, said coach Nick Nurse, as he's seen his team play this season.
"We really did want to get out there and play with tempo but creating all those turnovers and getting out and running is, jeez, any time that's going to be good offence," Nurse said.
The Raptors led 77-37 through two quarters became the biggest halftime lead in Raptors history, and the largest in the league this season. It's also tied for the eighth biggest halftime lead in NBA history, and the largest deficit at the break ever for Utah. 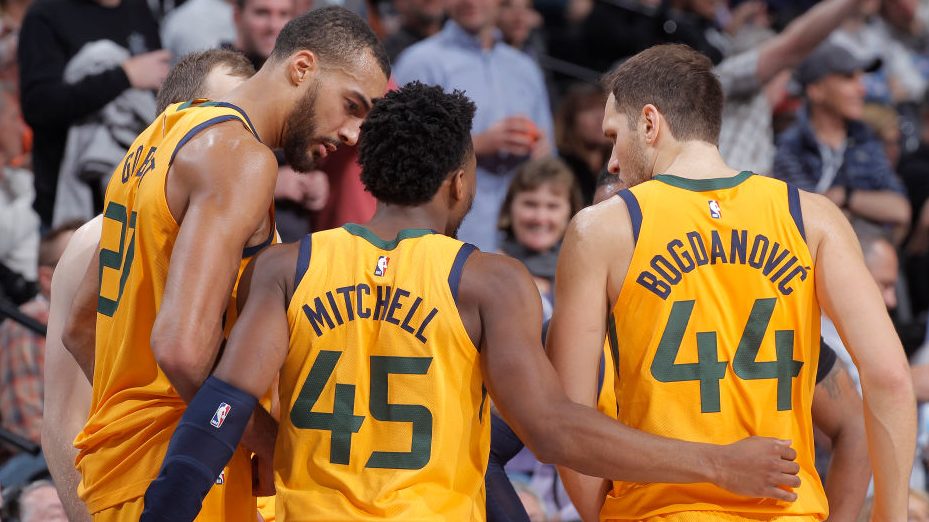 Photo courtesy of Rocky Widner, NBAE, Getty Images
Utah finally found its form in the 3rd quarter, shooting 60% and 8-10 from long distance, and when they scored a three-pointer with 2:42 left in the quarter, it cut Toronto's lead to just 16. The Jazz outscored Toronto 49-30 in the quarter, and Toronto took a 107-86 advantage into the fourth.
"I think we gave up 49 points, which you select all and delete it, straight to the trash," Gasol said.
Those 49 points allowed tied a franchise worst.
"I don't want to really talk about that third quarter if that's all right?" Nurse said laughing. "I'm happy that we get a 20-point win against a quality team like that. You take that every day of the week."
Trailing by 21 to start the fourth, Utah managed to pull within 16 again, but when Anunoby took off for an alley-oop dunk from VanVleet, swinging on the rim to the delight of the Scotiabank Arena crowd, the highlight-reel play had Toronto back up by 20.
The Raptors (15-4) stretched their season-high winning streak to seven games. They have yet to lose in nine games this season at Scotiabank Arena. 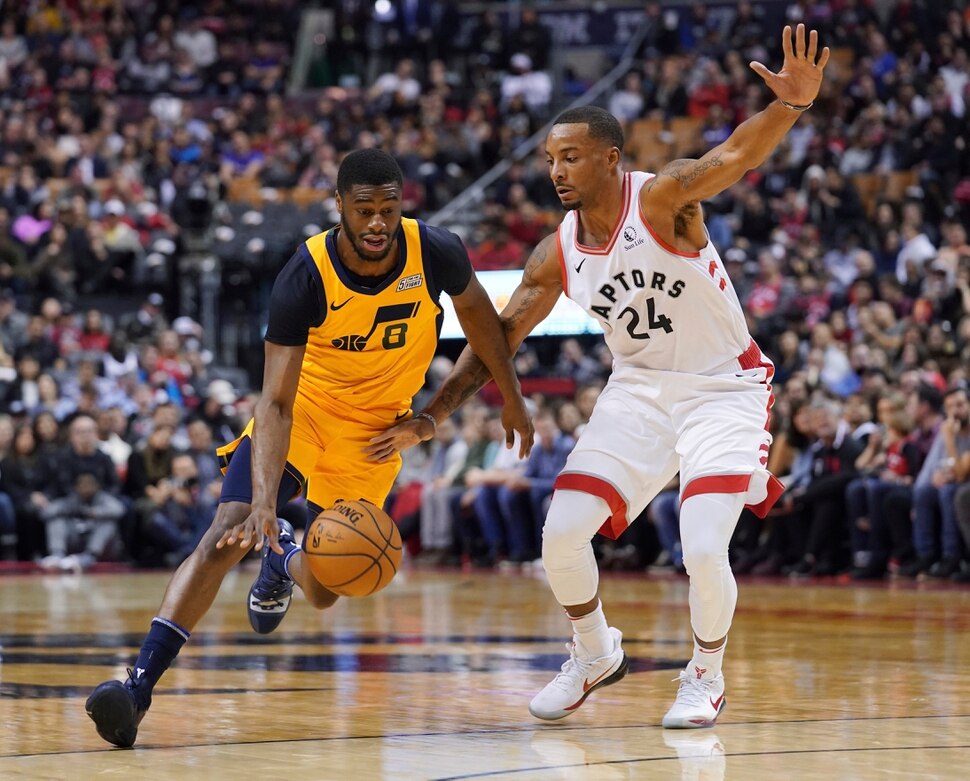 Photo courtesy of Hans Deryk, CP via AP
The Raptors had eight players score in double figures against a Jazz team that arrived boasting the league's fifth best defense.  Norm Powell scored 15 points, Ibaka had 13 in his first game since missing 10 with an ankle injury, Terence Davis also had 13, Marc Gasol scored all 11 of his points in the first quarter, and OG Anunoby and Hollis-Jefferson had 10 apiece.
It was a bounce back game for Siakam, who scored a season-low 10 points on 4-for-22 shooting in Friday's win in Orlando.
"You're just mad," Siakam said. "I'm mad at myself as a competitor. I've always been that way. You understand that there's bad games and you're going to have games where shots are not going to fall. But at the same time, coming into the next game, as a competitor, you always have that mentality to get back to it. You want to get on the floor. I wanted to play yesterday. That's how bad I wanted it."
The Raptors have won 11 of their last 13 games against the Jazz.
"We shouldn't have had any lack of focus coming into a place like this," Conley added. "This is a team we know is playing at a championship level. We didn't match their energy at all. It just was kind of a snowball effect and everybody got down.
"They're tough, they're really tough. They just play so well together."
The game tipped off a busy December home schedule for the Raptors. They play 11 of their 16 games this month at Scotiabank Arena. Canadian Kelly Olynyk and the Miami Heat are in town on Tuesday.
Toronto Raptors MLSE NBA NBAPA Larry Tenenbaum Masai Ujiri Wayne Embry Bobby Webster Dan Tolzman Nick Nurse OG Anunoby Chris Boucher Oshae Brissett Terence Davis Marc Gasol Dewan Hernandez Rondae Hollis-Jefferson Serge Ibaka Stanley Johnson Kyle Lowry Patrick McCaw Malcolm Miller Shamorie Ponds Norman Powell Pascal Siakam Matt Thomas Fred Van Vleet John E. Sokolowski USA TODAY Sports CP AP Rocky Widner NBAE Hans Deryk BarnBurner.ca KBuenaRadio.TV Spanglish Sports World Eduardo Harari La Portada