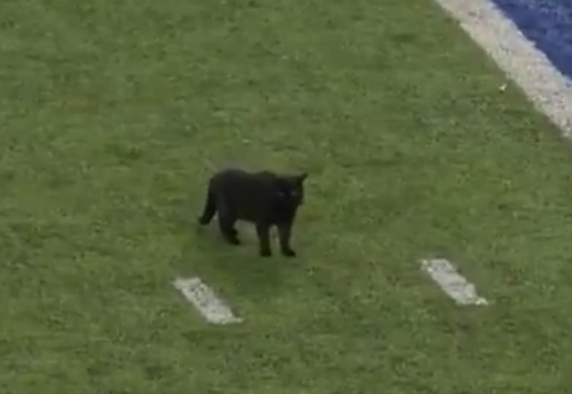 Photo courtesy of Adam Hunger, AP
By Betsy Berns – BarnBurner.ca
FOOTBALL
All anyone can talk about after the Dallas Cowboys beat the New York Giants on Monday Night Football is the black cat running on the field in the middle of the second quarter. The Cowboys had a rough start to the game (interception, fumble, missed field goal), but then everything changed when the black cat took the field, and the Cowboys left with a 37-18 win. Announcer Kevin Harlan gave a brilliant play by play of the cat.
BASKETBALL
Photo courtesy of AFP
With 40 points from the Suns' Devin Booker, Phoenix delivered the Philadelphia 76ers their first loss of the season. The Sixers played without center Joel Embiid who was suspended for two games for an on-court fight with Minnesota's Karl-Anthony Towns. Suns 114, Sixers 109
The Golden State Warriors suffered a devastating blow on Wednesday night when superstar Steph Curry broke his left hand in a blowout loss to the Phoenix Suns. The Warriors are already playing without an injured Klay Thompson and Kevin Looney, so the prospects for the five-time NBA champs look bleak.
BASEBALL
Photo courtesy of Elsa, Getty Images
The Washington Nationals became World Series Champions for the first time in franchise history. With a 6-2 game 7 victory over the Houston Astros, the Nationals clinched the title and astounded their fans. Back in May, the Nationals were 19-31 and didn't look like they'd even reach the postseason, but they went on a 74-38 run to reach the playoffs. And if that display of grit wasn't historic enough, the Nationals recorded another milestone moment by becoming the only team in 114 years to win the Championship title without winning at least one home game during the series. Congrats Washington Nationals!